A Partisanship Of The Heart: Interior Measures Towards A Re-Visioning Of Capitalism's Imperium Of Death 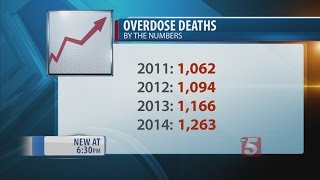 According to a nationwide study conducted by the Center For Disease And Prevention (CDC) a greater number of US Americans died (approximately 65,000) from drug overdoses last year than were killed during the course of the Vietnam War.

All part and parcel of capitalism's war against life itself. The emotional and physical pain, anxiety, and depression inflicted by the trauma inherent to a system sustained by perpetual exploitation has proven to be too much for a sizeable number of human beings to endure, thus their need to self-medicate.

The root of addiction is trauma. The soul of the nation is a casualty of war. There is not an Arlington Cemetery for these fallen, no hagiographic ceremonies will be performed over their graves nor statues erected in memoriam. Their ghosts will howl through the long, dark night of national denial. Listen to their wailing. It is an imprecatory prayer. A curse and augury...that admonishes, our fate and the fate of the nation will converge...as the nation will stagger, keening in lament, to the abyss.

The solution: Within each of us swells a deathless song. Powerful. Resonate. Piercing. A song, miraculous of influence, plangent with the force to seize back your soul from the death-besotted spirit of the age. Let it rise from within you. Notice: how flocks of empire's death birds scatter like ashes in the wind.

Yet it will not be possible to navigate around the cultural deathscape; we must walk through it and chronicle its serial affronts to our humanity:

Try this: Simply stand in the isle of a corporate, Big Box chain store or in the parking lot of a strip mall that squats, hideous, on some soul-defying, U.S. Interstate highway and allow yourself to feel the emptiness and desperation extant. The tormented landscape, besieged by an ad hoc assemblage of late capitalist structures, emporiums of usurped longing, reflects the desperate, rapacious nature of late capitalist imperium.

Compounding the pathos, the forces in play impose a colonising effect upon the mind; therefore, a large percent of the afflicted have lost the ability to detect the hyper-entropic system's ravaging effects. Stranded among the commercial come-ons and hyper-authoritarianism inherent to late stage capitalism's imperium of death, the human psyche, like the biosphere of our planet, subjected, at present, to humankind-wrought ecocide, has begun to display the terrible beauty of a nightmare. Internal weather has grown increasingly chaotic: the earth's oceans and seas are rising; wildfires rage; drought scorches the earth. And conditions will grow increasingly inhospitable in regard to the flourishing of inner life, personal and collective thus will continue, and at accelerating rates, to be reflected in the web of phenomena we know as human culture.

Growing up in a working class social milieu, as I did, I am confronted, more and more, by the news of the large number of men I grew up with who are dying in their 50s. As of late, when I contemplate the fact, I am forced to pause and seek solitude because my eyes become scalded with tears. I've known, over the years, hundreds of human beings, born into and ensnared by the crime against humanity known as poverty, broken by the culture of greed and social degradation, and blamed by the clueless and the callous for the tragic trajectory in which impersonal fate and the wounding culture, by no fault of their own, has placed them.

Thus arrive: Tears of rage; tears of outrage. Tears unloosed by passion and tempered by compassion...fall. If poverty was not so profitable for the greed head elite, both punitive-minded conservatives and affluence-ensconced liberals alike, the situation would be addressed and rectified. The cause of the reprehensible situation, it should go without saying, is not the fault of the poor but the poverty of spirit at the core of capitalism.

Truth is, the system, a hierarchy of ghouls, is maintained by harvesting the corpses of the powerless, by means of imperial slaughter and domestic, economic exploitation. Deep down, we know it. The system's psychopathic beneficiaries, in particular, are aware of the reality. In fact, their desiccated hearts require being irrigated by blood. From the evidence of their actions, it appears, they revel in the knowledge of the damage they incur. They appear to believe they will enter the golden dominion of heaven by climbing a mountain of corpses. It is time we dragged them back down to earth and subjected them to our earth-borne fury.

Or so goes my own (powerless) revelry. Of course, we the powerless, at this point, have been left with scant little but a dreaming heart. When we allow heartless power to subdue and usurp our longings, we languish. Thus many die of a broken spirit. The world itself can appear to be depleted of mercy. In turn, all too many begin to mirror the malevolence of the upper castes thereby losing their own measure of mercy.

Hostility directed at the poor is the shopworn, demagogic sleight of hand trick used to distract from realities such as: Every mcmansion and high end luxury high-rise constructed creates multitudes of the homeless. Every low pay, no benefits, no future mcjob serves to decimate an individual, heart and spirit. Moreover the beneficiaries of the system promote the lie, that shame should be the exclusive dominion of those broken by their system, a system, which is, in essence, a form of government-sanctioned gangsterism, by which they, the ruthless few, and they alone, benefit.

Related Topic(s): Capitalism; Culture; Death; Empire; National Socialism; Nationalism; Resistance, Add Tags
Add to My Group(s)
Go To Commenting
The views expressed herein are the sole responsibility of the author and do not necessarily reflect those of this website or its editors.