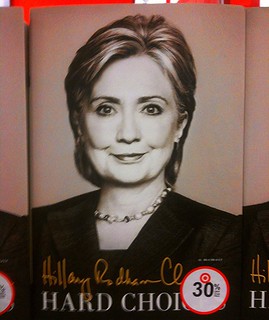 The one, and really so far only, real attack angle that the GOP will exploit to the hilt against 2016 Democratic presidential contender Hillary Clinton is the sleaze factor. It will go like this Hillary, and by extension hubby Bill, have such a long and checkered history of shady dealings, conflict of interest shenanigans, financial nest feathering, and improprieties that she simply can't be trusted in the White House. At first glance, recent polls do show that Hillary's image as an upright, trustworthy presidential candidate has taken a walloping. .

A Quinnipiac University poll is especially troubling. It found that less than forty percent of voters said that she was honest. Among independents that can make or break a contender, the figures were even more abysmal. More than sixty percent of them said no that she couldn't be trusted.

The Republican National Committee didn't need polls to tell it that maybe, just maybe, Hillary's Achilles Heel could be it getting enough voters to hold their noses at the thought of a Hillary in the White House. Their game plan long before she declared her candidacy was quite simply to shovel out every tidbit of old and new dirt it could dredge up against her to torpedo her candidacy There will be a barrage of videos that they'll push viral that will remind voters of the old scandals the GOP in the past worked over endlessly to nail Bill and Hillary. Then there will be lots of new ones that will make much of the continual carping about the dealings of the Clinton's Foundation. This has been a particular sore point for the Clintons. Her purported inflated speaking fees, the constant lambaste that it grubs at money from many dubious sources, and that it shamelessly uses the Foundation to influence peddle both at home and abroad.

Some were quick to latch onto a report that revealed that Bill was an honorary chairman of the scandal plagued FIFA's campaign to have the U.S. host the World Cup in either 2018 or 2o22. The implication that Clinton's name on FIFA's bid for a World Cup host spot implies some kind of wrongdoing is absurd. But that's less important than just tossing the innuendo out there.

The GOP isn't banking solely on shoveling out dirt on Hillary to render her candidacy stillborn. They also bank that the supposed baggage that Hillary carries renders her an astonishingly divisive candidate. The checklist of the trumped-up scandals of the past from Whitewater to the Lewinsky scandal, her tout of health care reform, which was the prelude to the much harangued Affordable Care Act, and most importantly her alleged cover-up of Benghazi. There was little doubt that the first chance the GOP got it would seize on a real or manufactured Obama foreign policy flub and make her their hard target. Benghazi proved to be the alleged flub and the GOP pounced. In August 2013, the Republican National Committee rammed the attack home with a half-minute clip of her Senate Foreign Relations Committee testimony earlier that year on the Benghazi attack. The aim as always was to embarrass and discredit her not because of her alleged missteps as Secretary of State, but as a 2016 presidential candidate.

The big question is will any of this work? The answer is no. There are two things that back the no answer. Every one of her declared and potential GOP presidential rivals so far are about as clean a Gene bunch as you'll find. They have no major sleaze baggage attached to their names so far. Yet, not one poll to date shows any of them beating her. In most cases, they trail so badly in the matchups that the 2016 presidential election would be over before the first ballot is cast.

Democratic leaders have mostly shrugged off the relentless barrage of personal smears, innuendos, and carps about her personal dealings as a bad case of the GOP and much of the media grabbing at straws or sensationalism to taint Hillary. They are, of course, right. However, this isn't to say that the attack campaign should be totally ignored. Clinton's favorability ratings have either dropped or flat lined as she moved steadily closer to declaring her presidential candidacy. More than a few Americans do take seriously the notion that the person in the White House must be as pure as Caesar's wife, despite the brutal reality and knowledge that politics is rough, tumble, and often very dirty business.

This makes it even more incumbent on Clinton to announce a firm, problem solving, action program that will tackle head on the big ticket concerns of voters from jobs and the economy to security. This is ultimately what elections are won or lost on. The 2016 presidential election will be no different. But that won't stop the GOP with a big boost from some in the media that hang on every whiff of a scent of a Clinton scandal from making sleaze the issue of the day with Hillary.

Earl Ofari Hutchinson is an author and political analyst. He is a weekly co-host of the Al Sharpton Show on American Urban Radio Network. His forthcoming book is: From King to Obama: Witness to a Turbulent History (Middle Passage Press) http://www.amazon.com/dp/0692370714

He is a weekly co-host of the Al Sharpton Show on American Urban Radio Network. He is an associate editor of New America Media. He is host of the weekly Hutchinson Report Newsmaker Hour heard weekly on the nationally network broadcast Hutchinson Newsmaker Network.

Earl Ofari Hutchinson is a nationally acclaimed author and political analyst. He has authored ten books; his articles are published in newspapers and magazines nationally in the United States. Three of his books have been published in other (more...)
Related Topic(s): Hillary Clinton; Hillary Clinton, Add Tags
Add to My Group(s)
Go To Commenting
The views expressed herein are the sole responsibility of the author and do not necessarily reflect those of this website or its editors.