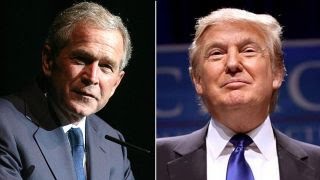 Besides being born with a silver spoon in his unfiltered mouth, Trump's defining trait is his cavalier lack of substance, a man arrogantly devoid of any true ideology or serious knowledge about anything, nor possessed of any real sense of responsibility f
(Image by youtube.com)   Details   DMCA

Indeed, he was "Tea Partied." (Yes, indeed, most U.S. have never met a noun that they did not want to verb.) But more often than not the Rightward Imperative focuses on the mis-named "social issues," which are really the issues of religious dogmatism and authoritarianism, racism and xenophobia.

As I said, in the column cited above, Ronald Reagan initiated the historical stream of GOP-led right-wing reaction which we now see in front of us, every day. They do have real policies which have underlain the Party's programs since that time. As is well-known, the GOP represents major sectors of the US economy: the extractive/fossil-fuel industries, the military industrial complex, the prison-industrial complex, corporate agriculture, the "health" insurance and pharmaceutical industries, and of course corporate and "investment" finance.

But they could, and hardly can, run on a platform of "let the oil and coal companies do whatever they want to," "we want the rich to get richer, donchaknow," "we want to export as much American capital overseas where it can make larger profits than it can here, so we really want to de-industrialize our country," "we don't care about the health of the American people but we do care about the profits of the health care industry," "we would like to have permanent war if we can get it," "we want to completely convert the US economy from industrial capitalism to finance capitalism," and so on and so forth.

And thus, their real policies have included (see Pretty Boy Ryan, himself a true Far-Rightist): further tax cuts for the rich; creating ever-widening income and wealth gaps; reducing environmental, transportation, workplace, finance, and etc. regulation to the greatest degree possible; further facilitating the export of capital; promoting the Permanent Preparation for Permanent War economy; the abolition of Social Security and the tattered remains of the "welfare" system, and so on and so forth.

And so here came Donald Trump. He may be poorly educated, poorly informed, and possessed of little knowledge about how the extremely complicated U.S. government actually works, but he is a great huckster. He also understood well the Rightward Imperative. Whether or not he consciously set out to employ it, he has proved himself (by lucky instinct) a master of the craft, beginning of course with the "Birtherism Hoax" of which he was the leading perpetrator in the run-up to the 2012 election. To be sure, he is not himself much with the underlying dogmas of the Religious Right, but he surely has known how important it is to get there in appearance if you want to get the Repub. nomination.

And so he did, starting with his Liberty University speech. You may recall that even though he revealed that he really doesn't know the Bible that well, using a mis-citation, it was the content of what he said that enthralled the crowd, and then a much wider audience on the Religious Right. He did it so well, that he swamped the collection of true Religious Rightist Dominionists who had entered the primaries, which included Ted Cruz, Ben Carson, Mike Huckabee, and Marco Rubio. He has now capped this particular march to the Religious Right by hooking up with Mike Pence. This guy is a genuine religious rightist: a total homophobe who also sponsored highly restrictive abortion legislation. He is also ranked as the Most Conservative Governor in the nation.

A religious zealot, abject chauvinist and warmonger, and 100% corporate owned, Mike Pence--who does have a political brain-- typifies the excrement that rises to the top in the US political system. A fitting VP choice for Trump.
(Image by Greanville Post)   Details   DMCA

This guy wants to use the force of the law to allow holders of one religious view to deny civil and public rights to persons of another religious view. And yes folks, that is exactly what the Pences of this word would do: set one religious view against another, with the state standing behind the first against the second. In the 16th century people slaughtered each other over the issue of whether the wine and wafer of Communion are really the blood and body of Christ, or just symbolic thereof. In the 4th through the 6th centuries, in the region of the Byzantine Empire, people slaughtered each other over the issues of whether Christ was uni-, bi- or tri-partite (the Monophysite Controversy) or whether Christ was really Godlike or rather a totally remarkable human being: the "Arian Controversy." This is what the Mike Pences of this world would lead us to.

Other examples of the Rightward imperative were on full display at the Convention.

The nomination of Donald Trump is, so far, the furthest projection of the Rightward Imperative. He is running openly, without the usual "dog whistles," on racism, xenophobia, religious determinism, religious prejudice, Islamophobia, authoritarianism. (Funnily enough, he is against, or seems to be against, certain bedrock Republican principles like "free trade" and the export of capital. However, the Repubs. can live with that for, if Trump wins, the Congress will be more Rightist than ever and such legislation would never stand a chance of passage. Since, as his campaign chairman tells us, he would function more like the Chairman of the Board rather than the CEO [who would be Pence], this wouldn't make too much difference to him.)

If indeed Trump does win, and he very well might, in part because the apparent Democratic nominee is so personally damaged by the email controversy, as well as politically compromised, it will the prime example of how the use of the Rightward Imperative can propel the least qualified major party candidate ever in the United States into the most powerful position in the world. If that happens, gotta give it, and him, credit, for, if the Convention is any example, it sure wouldn't have been done on policies and programs.

Steven Jonas, MD, MPH, MS is a Professor Emeritus of Preventive Medicine at StonyBrookMedicine (NY) and author/co-author/editor/co-editor of over 35 books. In addition to his position on OpEdNews as a "Trusted Author," he is a Senior Editor, (more...)
Related Topic(s): Demonizing; Donald Trump; Issues; Nomination; Republican, Add Tags
Add to My Group(s)
Go To Commenting
The views expressed herein are the sole responsibility of the author and do not necessarily reflect those of this website or its editors.