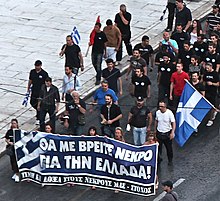 Golden Dawn demonstration of the Greek Fascists. What? You think it can't happen here? Except they will be called .Republicans..
(Image by Wikipedia (commons.wikimedia.org), Author: Steve Jurvetson)   Details   Source   DMCA

Steve Schmidt is a well-known former Republican who became a former Republican when the Party changed its identity to that of the Trumpublican Party. However, in my view that is just an interim moniker for it. The Party, as I have noted previously, is now on its way to becoming an outright fascist party*, as in this column's title. An increasing number of observers, from Charles Blow to Michele Goldberg to Paul Krugman to Jamelle Bouie have been noting and documenting this progression. Mr. Schmidt argues that Trump is the leader of the movement, and that he is essential to it. In my view Trump is simply a headlight for it. He has for sure been guiding the Party down the track to fascism in the current era. But there are proto-fascist forces within and allied with the Party that in the long run are much more powerful than he is, and they go way back in time. And these are the ones with which we really need to be concerned.

Mr. Schmidt recently published a well-known statement on Trump and what I call the Trumpublicans. Among other places, it can be found here: Mr. Schmidt summarized his argument very well:

"'Trump is the leader of an authoritarian movement made up of an eclectic mix of extremists including Proud Boy fascists, Neo Nazis, white nationalists, religious fanatics and conspiracy theorists. The Republican Party is the vessel of this movement and the membership of that party is overwhelmingly united around the cause of Trump. . . .

"We are in the early years of a great struggle in this country that will last a long time provided the pro-democracy side can win elections because we are one away from seeing the autocratic side take power. They will not relinquish it again when they do.

"The GOP was not chastened by January 6th. It has grown more extreme and it is on track to take back control of the House in 22. The pro-democracy coalition won a great victory when Joe Biden became President. That victory has brought us some time but all the time in the world can't cure a willful and delusional blindness to the great danger, resilience, ambition and authoritarianism of Trump's movement."

Yes, it is "Trump's movement" --- but just for now. Indeed --- which is the point of this column --- it has been under development since well before Trump made his very convenient racist/fascist appearance for it. And it will be here, unless it is stopped and stopped very soon, long after Trump disappears from the scene. (How might that happen? Natural causes --- he is 74, over-weight, and lives a high-stress very unhealthy life-style. Legal causes, civil and criminal. He goes "nuts" in public [that is really "nuts" or politically nuts] one time too many. On the other hand, as I have speculated previously, he comes to his senses and gets himself and as much of his money he can manage to accumulate out-of-the country. Actually I thought that he would do this well before now, and I was wrong there. The man has nerve. But it could still happen.) Indeed, for the Republican Right he has been a Useful Idiot, just as he was (and maybe still is) for Russia's Pres. Putin.

The Voter Suppression movement started at least as far back as 1989 with an organization called "The Christian Coalition" which designed a strategy to permanently win elections for the far-right, which they called "The 15% solution." Back in 1996 I first published a book based on what might happen were the strategy to be implemented, which strategy I summarized in a column earlier this year.

The Republican right, Religious and other, has been working on this strategy, which focuses on voter suppression (sound familiar) ever since the far-right leader Paul Weyrich famously said (Freedom Writer, Nov., 1994): "We don't want everyone to vote. Quite frankly, our leverage goes up as the vot­ing popu­lation goes down." Now of course in a very disorganized way this has been Trump's strategy since before the 2016 election. Trump, of course, does "galvanize his base." And the thought that he is in the process of taking over the Republican Party and that he is driving it further to the right using the primary strategy of voter suppression certainly has much going for it (as I have documented numerous times over the past 6 years).

But in a document recently revealed by Mother Jones and others, which The Guardian headline summarized as " 'It can't be that easy': US conservative group brags about role in making voting harder," it has now, all of a sudden become quite obvious that this movement towards fascism does not depend on Trump. It is just using him for now, as a disposable headlight. What is really driving the movement at this time is such organizations as the Heritage Foundation and important forces, elected and otherwise, within the Republican Party. (Coincidently a co-founder was Paulk Weyrich, and noticeably for years it has had a Deputy Director married to a Supreme Court Justice [who could that be other than Silent Sam Clarence Thomas]. Can you just imagine what the continuous uproar --- for years - would be from Hannity et al if there were a liberal justice married to a high official of say, the ACLU? But that's another matter.) The specific voter-suppression off-spring is called "Heritage Action." As the Mother Jones article says:

"The leaked video reveals the extent to which Heritage is leading a massive campaign to draft and pass model legislation restricting voting access, which has been swiftly adopted this year in the battleground states of Georgia, Florida, Arizona, and Iowa. It's no coincidence that so many GOP-controlled states are rushing to pass similar pieces of legislation in such a short period of time."

So, this is nothing new. It also goes back to the American Legislative Exchange Council, founded by the Kochs in 2007 with a primary goal of taking over state legislatures in advance of the 2010 census, to be in charge of re-districting, and in Republican terms "Gerrymandering," about which they are hardly shy. Although the Democrats had ten years to plan for and implement a countervailing strategy, they did not do much and as is well-known things are even worse this time around.

Steven Jonas, MD, MPH, MS is a Professor Emeritus of Preventive Medicine at StonyBrookMedicine (NY) and author/co-author/editor/co-editor of over 35 books. In addition to his position on OpEdNews as a "Trusted Author," he is a Senior Editor, (more...)
Related Topic(s): Donald Trump; Donald Trump Racist; Fascism; Fascist; Filibuster; Hitler; Nazis; Trump Against Democracy; Trump And Putin; Trump Fascist; (more...) Trump Idiot-in-chief; Trump Presidency; Trump Racist, Add Tags  (less...)
Add to My Group(s)
Go To Commenting
The views expressed herein are the sole responsibility of the author and do not necessarily reflect those of this website or its editors.

(You can only use the social login buttons before entering a comment.)
9 people are discussing this page, with 14 comments