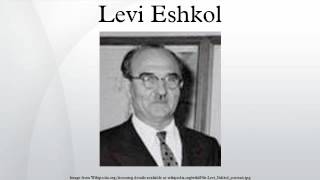 Levi Eshkol served as the third Prime Minister of Israel from 1963 until his death from a heart attack in 1969.
(Image by YouTube, Channel: Audiopedia)   Details   DMCA

ON THE fifth day of the six-day war in 1967, I published an open letter to the Prime Minister, Levy Eshkol. The Israeli army had just conquered the West Bank, East Jerusalem and the Gaza Strip, and I proposed that Eshkol immediately offer the Palestinian people to establish the State of Palestine there, in return for peace with Israel.

I was a Member of the Knesset at the time. Two days after the end of the war, Eshkol asked me to meet him in his office in the Knesset building.

He listened to what I had to say, and then he answered with a fatherly smile: "Uri, what kind of a trader are you? In a negotiation, one offers the minimum and demands the maximum. Then one starts to negotiate, and in the end one reaches an agreement somewhere in the middle. And here you want to offer everything before the negotiation even starts?"

I objected feebly that this may be true about an ordinary deal, but not when the fate of nations is concerned.

There was no effective pressure, so Israel kept everything.

I REMEMBERED this episode when I watched the second episode of Raviv Drucker's outstanding TV series about Israel's past Prime Ministers. After Ben-Gurion came Levy Eshkol.

Drucker portrays Eshkol as a nice and bumbling politician, a weak person who happened to be in office when the most fateful war broke out with results that have shaped our destiny to this very day. Little Israel became a regional power, with large occupied territories north, east and west. Eshkol was pushed around by his rebellious generals, made decisions against his will under duress. So Israel's present situation was shaped almost by accident.

All Drucker's facts are scrupulously correct, and like the chapter about Ben-Gurion, this one, too, is full of new disclosures, new even to me.

Yet I think that Drucker's characterization of Eshkol is not completely accurate. True, Eshkol was an amiable person, modest and moderate, but underneath it all there was a hard core, an obstinate belief in the Zionist ideology.

Before becoming Prime Minister by the general consent of the Labor Party, when Ben-Gurion had become intolerable and was kicked out, Eshkol was in charge of settlements. His determination to settle Jews on the land owned by Arabs was unshakable.

Between us a curious relationship developed. I was the enfant terrible of the Knesset, a one-man faction in extreme opposition, hated by the ruling Labor Party. I was seated in the Knesset hall just under the speaker's podium, an ideal place to interrupt the speaker.

Eshkol was an abominable speaker, the despair of the stenographers. His sentences had no beginning and no end. When I interrupted him with a remark, he forgot what he was going to say, turned towards me and answered in a friendly way, driving his party colleagues mad.

But I had no illusions. It was under his government that the Knesset enacted a law that was quite openly designed to close down my weekly magazine, which was detested by the ruling party (a fact that induced me to run for the Knesset).

Related Topic(s): Arab; Israel; Knesset; Palestinian; Prime Minister Levy Eshkol, Add Tags
Add to My Group(s)
Go To Commenting
The views expressed herein are the sole responsibility of the author and do not necessarily reflect those of this website or its editors.