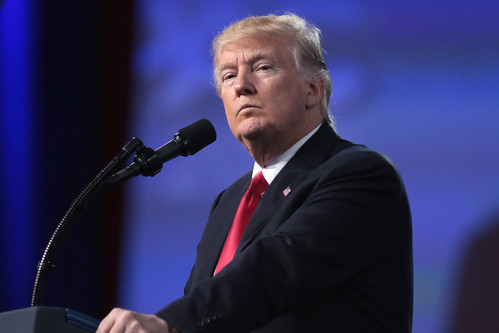 Amid the impeachment furor, don't lose sight of the renewed importance of protecting the integrity of the 2020 election.

It's that Nixon's abuse of power was discovered during his second term, after he was reelected. He was still a dangerous crook, but by that time he had no reason to inflict still more damage on American democracy.

Trump's abuse has been uncovered 14 months before the 2020 election, at a time when he still has every incentive to do whatever he can to win.

If Special Counsel Robert Mueller had found concrete evidence that Trump asked Vladimir Putin for help in digging up dirt on Hillary Clinton in 2016, it would have been the "smoking gun" that could have ended the Trump presidency.

Now that Trump is revealed to have asked Volodymyr Zelensky for dirt on Biden in the 2020 election, who's to say he isn't also asking others, including Putin?

The Washington Post reported that Trump told Russian officials, in a 2017 meeting in the Oval Office, that he was unconcerned about Moscow's interference in the 2016 U.S. election (White House officials limited access to these remarks, as they did to his outreach to Zelensky).

American intelligence warns that Russia will continue to try to interfere in our elections. Mitch McConnell has agreed to add just $250 million to protect election machinery from cyberattacks, while experts say billions are needed.

Trump is in a better position to make such deals than he was in 2016 because as president he's got the power and money to make any foreign rulers' life exceedingly comfortable, or uncomfortable.

As we've learned, Trump uses whatever bargaining leverage he can get, for personal gain. That's the art of the deal.

Who can we count on to protect our election process in 2020?

Certainly not Attorney General William Barr. Trump urged Zelensky to work with Barr to investigate Joe Biden, even telling Zelensky that Barr would follow up with his own phone call.

Barr's Justice Department decided Trump had not acted illegally, and told the acting director of national intelligence to keep the whistle-blower complaint from Congress.

This is the same Attorney General who said Mueller's report cleared the Trump campaign of conspiring with Russia when in fact Mueller had found that the campaign welcomed Russia's help, and that Mueller absolved Trump of obstructing justice when Mueller specifically declined to decide the matter.

Related Topic(s): 2020 Elections; Trump Against Democracy; Trump And Barr; Trump And Putin; Trump Crime; Trump Impeachment; Trump Liar; Trump Nixon Moment; Trump Scandal, Add Tags
Add to My Group(s)
Go To Commenting
The views expressed herein are the sole responsibility of the author and do not necessarily reflect those of this website or its editors.