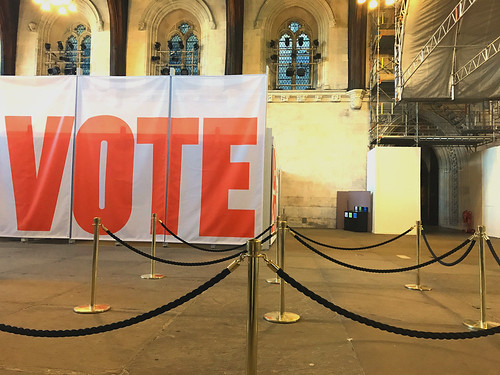 Elections in the kingdom.
(Image by byzantiumbooks)   Details   DMCA

"Hey, Hatter," said the White Rabbit, "you haven't invited us over for ages. What up, bro?"

A sigh from the Mad Hatter. "Look at all this crumpled paper. I've been working on finishing up my play."

"Of course. I always follow the rules," Alice insisted.

"So what's the play about, Hat?" asked the Rabbit.

"It's a political thriller--in a galaxy far, far away. Half of it's written, but I haven't figured out the ending yet," the Hatter admitted.

"Well, maybe we can help. Where are you stuck?"

Hatter turned the typewriter roller and listened to it click. "Here we go. It's set in the kingdom of Mordovia on the other edge of the universe. Now, I have a pretty big cast. Over 20 people running for king on the one side. A lot of them are obvious comic relief. Like this chap doing an Ollie on his skateboard. And Rosencrantz and Guildenstern for pithy asides. But I need to sell some updates in Act II."

"I introduced a wizened elder in Act II," Hatter said, "and now he's taken over the entire scene."

"My writing professor told me that characters do that. After a while, they're so well developed, they start "telling the author what to write"."

Hatter shook his head. "I wouldn't call J.B. "well developed". He may have been once, but now he's an empty vassail except for War and Capital. Any "deep" dialogue he orates comes from "the deep". If you get my adrift at sea. He represents the essence of 'steady as she goes' that existed the decades prior to the reign of D.T.."

The Rabbit shrugged. "So why don't you just go with the flow then?"

Related Topic(s): Elections; Fantasy; Writing, Add Tags
Add to My Group(s)
Go To Commenting
The views expressed herein are the sole responsibility of the author and do not necessarily reflect those of this website or its editors.