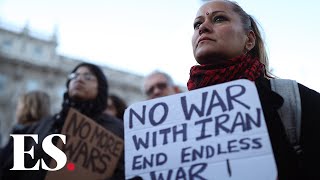 The Washington, D.C., establishment and the U.S. mainstream press continue to express concern about the possibility that war is going to break out between the United States and Iran. That is ridiculous. What they don't want to confront is that the U.S. government is already waging war against Iran and has been for many years.

After all, how else to describe the vicious and brutal U.S. economic sanctions on Iran? Those sanctions target the Iranian populace with death and economic impoverishment and have been tremendously successful in achieving that end.

Sure, it's not bombs, missiles, and bullets that are killing and destroying the Iranian people, like the way U.S. officials have been killing the people of Iraq and Afghanistan for decades. But make no mistake about it: A person who is killed because of sanctions is just as dead as the person killed by bombs, missiles, or bullets.

But it is a big deal. The U.S. government has been and is knowingly, intentionally, and deliberately killing and destroying the Iranian people through economic sanctions. If that's not war, what is it?

Moreover, sanctions are an illegitimate way of waging war because they target the populace of a country as a way to defeat their regime. Intentionally killing civilians in war has long been considered to be a war crime.

After all, isn't that one of the reasons we condemn terrorism because it targets innocent people with death as a way to achieve a political end? Well, that's precisely what sanctions are intended to do to squeeze the Iranian people to death as a way to coerce or manipulate their government to bend to the will of U.S. officials.

Given that the U.S. government is killing Iranians, why isn't Iran counter-attacking by killing Americans? Isn't that what ordinarily happens in war both sides kill each other? The answer is that Iranian officials are not dumb. They know that Iran is an impoverished Third World country that is being attacked by the most powerful regime in world history. Iranian officials know that if they starting counterattacking by killing Americans, the Pentagon and the CIA will unleash their massive arsenal of bombs, missiles, and bullets on their country, bringing the same massive death and destruction to Iran that the U.S. national-security state has brought to Iraq and Afghanistan.

We saw this sanctions and bombing phenomenon in Iraq. The U.S. interventionist state intervened in the Persian Gulf War in 1990, during which the U.S. government massacred thousands of Iraqis. During that intervention, the Pentagon also intentionally destroyed the country's water-and-sewage treatment systems with the aim of spreading infectious illnesses among the Iraqi people.

Then, for the next 11 years, U.S. officials imposed and enforced a vicious and brutal system of economic sanctions on the Iraqi people, with the aim of forcing Iraqi dictator Saddam Hussein from power. But after the deaths of hundreds of thousands of Iraqi children from the sanctions, Saddam had still not left office. That's when U.S. officials used their post-9/11 invasion of Iraq to remove Saddam from power, which was when the killings of Iraqis by bombs, missiles, and bullets resumed.

The fact is that from the inception of the Persian Gulf intervention through the post-9/11 invasion of Iraq, the U.S. government was continuing to kill Iraqis with its sanctions, just as it killed Iraqis with bombs, missiles, and bullets before, during, and after the sanctions.

What we need to confront is not simply the fact that the U.S. interventionist state kills foreigners through such specific policies as sanctions, state-sponsored assassinations, coups, alliances with dictatorial regimes, invasions, wars of aggression, and occupations. To restore liberty, privacy, morality, prosperity, and harmony to our land, we need to confront the paradigm of foreign interventionism itself, including its policy of sanctions, and bring it to an end.

Related Topic(s): Impoverishment; Intervention; Iran War; Iranian General Killed; Sanctions, Add Tags
Add to My Group(s)
Go To Commenting
The views expressed herein are the sole responsibility of the author and do not necessarily reflect those of this website or its editors.