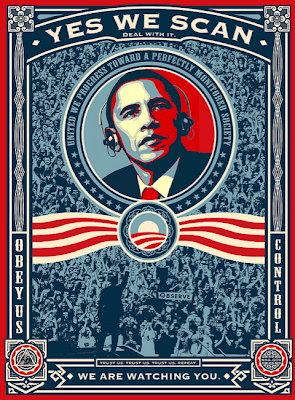 Coming right on the jack-booted heels of Friday's rubber-stamping of the NSA's extension to vacuum up of all Verizon customer phone data a bi-partisan effort yesterday beat back an attempt by insurgent Congressman Justin Amash. Joining Amash was longtime thorn in the side of the establishment John Conyers who tried in vain to reign in the civil liberties shredding surveillance colossus. Amash, a Republican from Michigan has now offered up some proof that even a teabagger, like a broken clock is occasionally right. It would be nice to see more of them drop the zany cultural populist issues and back up their anti-government rhetoric by joining with progressives to stop the juggernaut while there is still a sliver of time left to do so. That sliver gets tinier by the day and the forces arrayed against the destruction of the tattered remnants of a free society only get bolder and further consolidate their already dangerous positions of power. The Obama administration has proclaimed that it is above the law when it comes to spying on Americans and that their divine right of kings shalt not be challenged in court. In the same sort of twisted legalese that the Bush administration used to justify torture the Obama mob pushed back against the recent anti-spying lawsuit by the ACLU, claiming that it is in the "public interest" and cannot be challenged in a court of law.

The aforementioned pro-civil liberties amendment to a Defense Department appropriations bill (the country may be broke but there is always money for more war) want down in defeat 217-205 with such staunch and strident opponents of big government as John Boehner, Eric Cantor and Michelle Bachmann defending the American Stasi. I suppose that there should something of merit in the amendment even being brought up, something that would have been inconceivable earlier in the post 9/11 era of fear, loathing and the extortion of taxpayers to fund their own enslavement. However, there have been some changes in attitude since Edward Snowden's leaks but the defeat of the bill only provides more evidence that the system it rigged and that greed, war and oppression are the real things that bring Republicans and Democrats together. In a rare preemptive strike, El Presidente Obama even came out and had his flacks and shills issue a press release urging the defeat of the Amash amendment. NSA Commandant Keith Alexander also called for an emergency private briefing to rally the troops on the hill against the amendment lest his grossly perverted amassing of power take a hit. The whole rank process once again proved that in this rapidly decaying system there would be no challenge brooked nor the governed to be asked for their consent. The Alexander private decree is just like those secret courts that are the antithesis to any serious concept of democracy. Alexander is the strutting epitome of a military dictator salivating over the coming crackdown.

It is by now brutally evident to pretty much anyone who has bothered to read this far that we have a huge problem right now in America. It is a problem that dwarfs all others simply because the ability to collect and store information on all citizens is the primary lynchpin of a full-blown fascist state. But such a state also needs a propaganda spewing media machine, a desperate and poorly informed public, a paramilitary police and a myth of a constant outside threat that is used to justify the need for increasingly radical measures. The mass collection of the data is absolutely crucial in that it will be used when the ubiquitous outside threat is formally changed to an internal one.  That will be the time that the state will ruthlessly crush all perceived threats that may one day work to organize, inform, challenge and reverse the tide. As has been reported the NSA is now capable of conducting three hop data queries which as explained by Philip Bump at Atlantic Wire:

Think of it this way. Let's say the government suspects you are a terrorist and it has access to your Facebook account. If you're an American citizen, it can't do that currently (with certain exceptions)--but for the sake of argument. So all of your friends, that's one hop. Your friends' friends, whether you know them or not--two hops. Your friends' friends' friends, whoever they happen to be, are that third hop. That's a massive group of people that the NSA apparently considers fair game.

Theoretically anyone who is currently reading this website and about the entire country would be fair game for future pickup, interrogation, detention, torture and possibly even more extreme measures. This is not hyperbole either, as history has repeatedly proven, power always corrupts and in an end stage capitalist system such as the United States in the 21st century where the elite continue to gorge themselves at the expense of the vast majority and to do so with impunity and the full sanction and protection of the state it is inevitable that a backlash is coming. The backlash will not be tolerated under any circumstances as those who are elite will have no mercy or pause if their ill-gotten gains are ever threatened. When that does occur the pickup lists will be massive and generated instantaneously and that for profit prison system that rivals Stalin's gulags will provide wonderful temporary housing for the enemies of the state. Programs have already been rolled out encouraging citizens to watch and rat each other out for any type of vaguely "suspicious" behavior so the conditioning is already in the minds of Americans. Decades of movies and television programs have cemented into the consciousness a reverence bordering of worship of the police while the police have subsequently become armed to the teeth and transformed into paramilitary forces. This began with advent of SWAT teams late in the last century and now even Dogpatch USA likely receives war zone grade equipment from the government for their local cops. Radley Balko, author of Rise of the Warrior Cop writes in his article A Decade After 9/11, Police Departments are Increasingly Militarized that:

Over the last several decades Congress and administrations from both parties have continued to carve holes in that law, or at least find ways around it, mostly in the name of the drug war. And while the policies noted above established new ways to involve the military in domestic policing, the much more widespread and problematic trend has been to make our domestic police departments more like the military.

The main culprit was a 1994 law authorizing the Pentagon to donate surplus military equipment to local police departments. In the 17 years since, literally millions of pieces of equipment designed for use on a foreign battlefield have been handed over for use on U.S. streets, against U.S. citizens. Another law passed in 1997 further streamlined the process. As National Journal reported in 2000, in the first three years after the 1994 law alone, the Pentagon distributed 3,800 M-16s, 2,185 M-14s, 73 grenade launchers, and 112 armored personnel carriers to civilian police agencies across America. Domestic police agencies also got bayonets, tanks, helicopters and even airplanes.

The September 11 attacks provided a new and seemingly urgent justification for further militarization of America's police departments: the need to protect the country from terrorism.

Within months of the attacks on the Pentagon and World Trade Center, the Office of National Drug Control Policy began laying the groundwork with a series of ads (featured most prominently during the 2002 Super Bowl) tying recreational drug use to support for terrorism. Terrorism became the new reason to arm American cops as if they were soldiers, but drug offenders would still be their primary targets.