Disclaimer: To be clear I am not a Trumpster. Trump is an aggressive, sadistic, deplorable human being with a narcissistic, antisocial personality disorder. 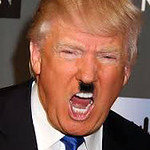 Trump never expected to win but when he did, he looked as if he had seen a ghost. There was, in the space of little more than an hour, in Steve Bannon's not unamused observation, a befuddled Trump morphing into a disbelieving Trump and then into a quite horrified Trump. But still to come was the final transformation: suddenly, Donald Trump became a man who believed that he deserved to be and was wholly capable of being the president of the United States." F ire and Fury by Michael Wolff

Watching the media trash Trump for getting conned by a "talented" 36-year old dictator whose talent is the ability to kill his relatives and countrymen with poison, chemical weapons, and flamethrowers, you have to wonder if Trump is really a mentally deranged "dotard."

Did Trump really give up everything because he sensed that Mr. Kim wouldn't renege on agreements like his father and grandfather did?

People are laughing when they hear Trump say that he trusted the rocket man to follow through on his commitments:

This isn't another administration that never got it started and therefore never got it done," said Mr. Trump, basking in the summit's apparent success. "I will do whatever it takes to make the world a safer place." "Mr. Kim wants a better future for the North Korean people, This isn't the past."

The declaration signed by Trump and the funny guy who is now "smart, loves his people and is a great negotiator," was light on specifics for the security guarantee for North Korea and for the path to denuclearization. Asked by ABC News' George Stephanopolous what security guarantees the U.S. offered, the president replied, "I don't want to talk about it specifically, but " he's going to be happy."

Our South Korean allies are speechless when they watched Trump flattering the totalitarian ruler and calling him a "very talented" and trustworthy leader.

Everyone, except the Trumpsters and Fox News, are sure that nothing good will come from the meaningless, communique' full of a combination of already-broken DPRK promises.

Is this the classic North Korean playbook?

The Lowy Institute's international security director Euan Graham says Mr Kim is swinging predictably from provocation to engagement. Close observers doubt that Kim is looking for peace and note that the only thing he has going for him is unprecedented nuclear capability and an unconventional US "dotard" president.

Is it really possible that the egocentric malignant narcissist Trump is that stupid and so desperate for adiplomatic victory that he would piss off our Allies when he agreed to terminatewhat Trump called "provocative" military exercises in the region to save money?

The Trump administration isn't winging it in a swirl of lies, contradictions, and Twitter rants. Trump is desperate, but even he has to know that showing Kim a video giving him one chance to show vision and leadership so that his nation can have a consumer society, isn't going to achieve denuclearization.

The Donald isn't so naïve as to believe that it was his "maximum pressure" approach that enabled a breakthrough where we got everything, "everything, and now we are safe."

Donald Trump knows what he is doing, but not in a good way. I investigated Trump before and after the election to verify that he was the one that managed the Trump organization. Trump managed the organization in between four bankruptcies, 13 business failures, three marriages, the storm, and the playmates.

Trump only wants the biggest, the best, the greatest deals and his father once told him, "You are a killer...You are a king"

Related Topic(s): Impeach Trump, Add Tags
Add to My Group(s)
Go To Commenting
The views expressed herein are the sole responsibility of the author and do not necessarily reflect those of this website or its editors.