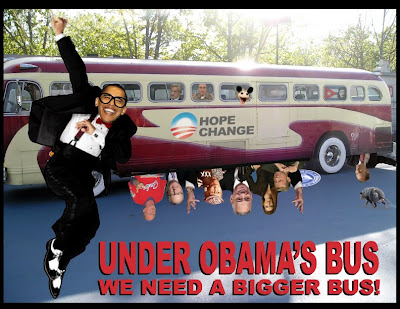 Copyrighted Image? DMCA
"How many times can anono-blogger @allahpundit write same piece in which he raises specter of me falling on face while I stand in end zone? - Andrew Breitbart on Twitter

(By American Zen's Mike Flannigan, on loan from Ari)

Jim Marshall of the Vikings also danced in the end zone. Only, in his famous wrong way play in 1964, he scored a couple of points for the opposing team because, after recovering a fumble, he ran into the opposing team's end zone. In that respect, We are Marshall. It can happen to any of us. This time around, it's Andrew Breitbart's turn to wipe the yolk off his face.

But Marshall's blunder was an honest mistake. Breitbart's was the more egregious because it was patently dishonest, needlessly changed the face of our government and it certainly wasn't a mistake. And there are many lessons that we could and should take away from this latest fuckup of Breitbart's, the MSM's and the Obama administration, once again asking, "How high, massa?" every time some vacuum-skulled, right wing douchebag like Breitbart or Rush Limbaugh or Glenn Beck snap their fingers.

First off, we need to ask ourselves why Breitbart settled his crosshairs on Shirley Sherrod, a low-level USDA bureaucrat in charge of rural development for Georgia, someone who had 49 other counterparts, over a speech given a quarter of a century ago when Obama was half his present age, a previously obscure bureaucrat who just happens to be African American?

Indeed, it seems every time Breitbart, James "Superfly" O'Keefe, Beck or someone wants to prove racism or a stereotype (such as black ACORN workers giving sympathetic advice to a pimp and his ho'), the subjects of their baleful ken always seem to be African American.

And if the white-dominated press didn't have such a reliable track record for passive racism (missing children grabbing headlines or lead stories are guaranteed to be white), it would be as big a mystery as to why they're as easily and gullibly led astray by right wing bloggers and media sites like the Drudge Report as so many unwitting Adam Walshes.

The MSM are, once again, unforgivably negligent and/or naïve for not sourcing its material and for not openly wondering why these very same right wingers consistently target people of color while, audaciously, charging them with nonexistent instances of racism against the poor, persecuted white majority. What were they thinking, or were they, in assuming that Breitbart did his homework for them? And, after this debacle, I don't want to hear any snooty, elitist dismissals of bloggers by this very same easily-fooled mainstream media.


How could the NAACP be so easily Klan hood-winked by a person with an equally reliable track record for chicanery when its own top officials were in live attendance for Ms. Sherrod's 1986 speech? Wouldn't they have had the full tape and not have to rely on a fuzzy, carefully edited version given to them by a Republican mainly noted for his witch hunts of African Americans? Had they learned nothing since Larry Johnson's phantom video of Michelle Obama's "whitey" speech?

And why isn't President Obama himself apologizing for, once again, allowing another fellow African American administration official to get thrown under the wheels of his Bipartisan Express and how come he's content with letting Robert Gibbs and Agriculture Secretary Tom Vilsack do his apologizing for him, in letting them keep him safely removed from the PR fallout? Or did I just answer my own question?

It's Van Jones/Glenn Beck all over again, only with a more overt racist overtone and impetus behind it all. In fact, mentioning the Nazi-loving/Nazi-hating Glenn Beck is very appropriate at this time.


Profiles in Cowardice
"(Resign), because you're going to be on "Glenn Beck' tonight." USDA Deputy Undersecretary Cheryl Cook to Shirley Sherrod.

The only reason I'm linking to the Wa Po's article is because they "privileged Breitbart's lie" according to Media Matters. As Media Matters points out, it took Karen Tumulty and Krissah Thompson 15 paragraphs to get around to admitting that Breitbart's video was far from a complete document of Ms. Sherrod's speech. It took them an additional two paragraphs to admit that she did, indeed, help Mr. Spooner, a struggling farmer. The speech was about owning up to mistakes and prejudices and learning from making those mistakes. Still, despite the Washington Post reporters coming clean, they never took it upon themselves to mention that Ms. Sherrod went on to save the family's farm but rather to let Mrs. Spooner say it for them. They chose, instead, to focus more on her "inelegant" delivery instead of how inelegant it was for a major metropolitan newspaper to trust that a right wing douchebag with an axe handle to grind would kindly do all their sourcing for them.

Perhaps it's too tempting to be seeing too much into USDA Deputy Undersecretary Cheryl Cook's incredibly craven comments by way of justifying why Ms. Sherrod should've needlessly fallen on a sword that was perhaps put into her hands by the Obama administration, certainly by the USDA. But this wetlegged attitude and almost atavistic, antebellum dread and terror of incurring white, right wing wrath had been a hallmark of the Obama administration since it was the Obama campaign.

Say whatever you want about the Bush era government, but you've gotta give them this: They never gave a rat's ass what the press or the people thought of their war crimes agenda and they certainly didn't give a sh*t about what a liberal blogger might write about them let alone a walking, talking bladder like Glenn Beck.

Related Topic(s): ACORN; Media; Obama; Sotomayor; Twitter, Add Tags
Add to My Group(s)
Go To Commenting
The views expressed herein are the sole responsibility of the author and do not necessarily reflect those of this website or its editors.