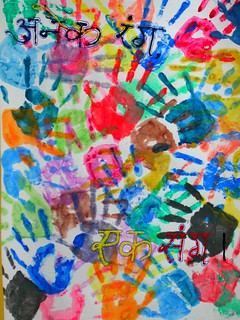 We should not use color to identify people.
(Image by Sanj@y)   Details   DMCA

The Mother of All Mothers of Racial Discriminations.

Is white a color or is it not? If some one asked me for an answer to this question, I would say it is a color and it is the weakest among the colors. There has been debates as to whether white is a color or the absence of color. There are even other points of view, which states that both white and black are not colors, but that is beyond the point.

Is America a nation of Immigrants? The answerer is for sure yes. Who are the indigenous inhabitants of America? The answer is again known: they are the Indians. From where did the people come to America? From Europe, Asia, Africa, Russia, Latin America and Middle East and other places.

Instead we call them "Whites". And worse we call all other Americans Colored people. Even the worst, some of those others gave in to this biased categorization and call themselves colored people, as if white is not a color. The real test of non-racial discrimination in America is to completely stop referring to people by color, including "white" color, and refer to people of US citizenship either as Americans or, if needed, refer to them by the land they or their ancestors came from such as European Americans, African Americans, Latino Americans and so forth. The use of color, any color including "white", to identify people should be legally criminalized and this will be the real test if America wants to kill racial discrimination forever.

Some times it feels (to me at least) that the use of "White" to identify people has a religious connotations. The first thing comes to my mind when I hear the word "White", in a political sense, is the word "Christian". People tend to believe every "White" is a Christian and sometimes they stop to think when they encounter a non-"White" Christian trying to pass the denial stage.

The color "white" has also been given a geographical dimension. The word "White" is also connected to the word 'West" in a political sense also. So people tend to believe (or more accurately made and pushed to believe) that all people living in the "West" are "Whites" and all "Whites" are Christians, making "White" color, "Christianity" and the "West" exclusive clubs. I tend to believe that there are think tanks behind these psychological playing-with-words games, maneuverings and injections to keep the racial and cultural supremacy well and alive.

Related Topic(s): People; Racial Discrimination; Racial Equality, Add Tags
Add to My Group(s)
Go To Commenting
The views expressed herein are the sole responsibility of the author and do not necessarily reflect those of this website or its editors.