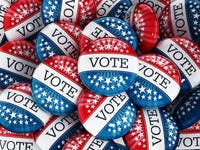 We have heard this before and, I hope, will hear it again. So far, according to the Congressional Research Service, the president doesn't have the authority to cancel an election, as people feared Richard Nixon would do during the Watergate fiasco in the early 1970s. CRS doesn't actually address "canceling" an election at all, but rather rescheduling it.

Given a highly competitive race in 2020, and given the politicization of SCOTUS, and a possible retention of a House majority once today's election is decided, and given Trump's attempts to overstep his executive prerogatives more than once, as recently as last week, who knows what may happen on that day or immediately preceding it? But we are concerned with today.

Of one thing we are certain, and even the mainstream media have reported on the subject: millions of votes have been removed illegally from registration lists. The state of Georgia has gained most notoriety for this, and coincidentally the SoS, in charge of elections, Brian Kemp, is also running for governor against a masterpiece of progressivism and possibly the first black woman governor of the state. He has refused to recuse himself even though he has taken charge of his own election.

Similarly, the king of illegally removing registered voters from lists, Kansas's SoS Kris KKK Kobach (Greg Palast's nickname for Kris Kobach) is running for governor of his state. He masterminded the Crosscheck system that links the databases of registration lists in a majority of states; consequently and unsurprisingly millions of voters have been illegally eliminated via this route also.

In the Peach Tree State, Palast and others obtained the lists via a federal lawsuit, but they could not reinsert all of the voters taken off the lists. They did their best to contact these victims, and October 9 was the deadline for registering to vote. Voters could still attempt to wait on hold contacting their board of elections. I don't know how many succeeded in being reinstated as qualified voters but I guarantee that lots of provisional ballots will be cast and most of them not counted.

So that via registration lists alone, in Georgia, Kansas, and many other states, millions will be kept from voting, some of whom may be given provisional ballots and others none. Other methods of preventing likely Democratic voters from voting today are countless--from bullying at the polls by adversaries disguised as ICE workers and NRA officials etc. to Native Americans in North Dakota who can't produce numbered-street addresses (p.o. box numbers are no longer accepted in that state as adequate address data points) to long lines in places where it is raining (DC, e.g.) and machine dysfunction slowing the process down even more.

In the District of Columbia I was told this morning that one line stretched back a block and a half and this was in the northwest section in an area that doesn't have federal representation. Our Congresswoman, Eleanor Holmes Norton, can vote at the House committee level but not beyond that. I can guarantee something else: a blue sweep is being blocked even though I read yesterday that only one-quarter of the U.S. electorate is "liberal," whatever that means. There was no further definition, so that progressives might not have been counted.

Nearly twice as many have already turned out to vote as in 2014, a nadir year with a lower number of voters than any time since 1942.

For the many dynamic new, young progressive candidates to win, there must be a landslide of voters and votes, one to exceed the millions who would vote for them but have been blocked.

In other words, I'd call this hypothetical event a miracle. And miracles do happen. Truman defeated Dewey in 1948. You know about the headlines that had to be rewritten. How many recounts will there be? How much post-election stress and too-close-to-call totals and recounts bound to be treated as they were in 2016 in Michigan, Wisconsin, and Pennsylvania. In the latter case, with 85 percent of the voting machinery touchscreen, I wonder why they even bothered. I wish they had chosen another battleground state.

Hand-counted recounts of paper ballots or digital images must be mandatory in the event of close results. But they will be avoided or interrupted as they were in 2016. I predict post-Election Day mayhem.

Regarding all of the above prophecies of doom, I hope and pray that I am wrong.

Related Topic(s): Election Day; Election Judge; Election Tampering; Election-Voting Issues News; Elections; Elections And Campaigns; Voting, Add Tags
Add to My Group(s)
Go To Commenting
The views expressed herein are the sole responsibility of the author and do not necessarily reflect those of this website or its editors.