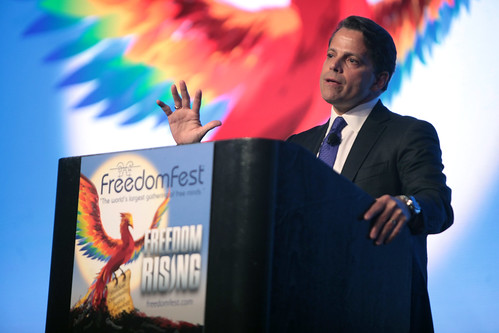 Donald Trump's White House seems more like a Quentin Tarantino movie every day. Amid allegations of broken laws and self-dealing at the highest levels, the president has now hired a Communications Director called "The Mooch."

The name brings to mind the famous "Mr. Pink" scene from Reservoir Dogs, where a macho Harvey Keitel resents being given that appellation during a heist and wants to trade names with another crook.

You can almost hear it now: "Why am I The Mooch?"

It's true that most members of Trump's team, including the president himself, could easily trade nicknames with Anthony Scaramucci. They're all moochers. Education Secretary Betsy DeVos was tied to a student loan firm and her department's actions directly benefited the family of a senior DeVos aide, who resigned after the conflict of interest came to light.

There are serious questions about Treasury Secretary Steve Mnuchin's financial interest in the administration's investigation of OneWest Bank. And virtually every senior Trump official stands to gain financially by his proposed tax cuts for millionaires and billionaires -- an underlying conflict of interest that would let them "mooch" off the poor and middle-class families who would be hurt as a result.

Trump himself is the Moocher-in-Chief, monetizing his presidency to the limits of the law and beyond. He even skimmed from a fundraiser by holding it at a Trump Hotel so the family business could profit from it.

Of course, Anthony Scaramucci would only want to trade away his nickname if he were ashamed of it, but he shows no sign of shame. On the contrary, the brash, self-promoting huckster seems proud of his background as a Goldman Sachs banker turned hedge-fund super salesman.

Scaramucci's firm, SkyBridge Capital, isn't even really a hedge fund. It's more of a hedge fund retailer. Scaramucci closes the deal and then farms the money out to other funds to manage. The firm sponsors a schmoozefest called the SALT Conference every year, where famous speakers talk while everyone in the crowd tries to hustle one another for business. Think of it as TED for greedheads.

Celebrities like like Magic Johnson and Al "Say Hello to My Little Friend" Pacino have put in appearances at SALT. So have famous business people like Dallas Mavericks owner Mark Cuban and hedge-fund investor John Paulson, an early Trump backer who made billions off of the subprime lending meltdown.

And in our "money talks" political environment, it's not surprising that a number of politicians and officials have also wet their beaks at the Scaramucci trough, including Bill Clinton, George W. Bush, Tim Geithner, and Tony Blair.

It's somehow fitting that a hedge fund investor who does no investing has now become the spokesman for a president who appears to do very little actual governing.

What Scaramucci does very well, however, is promote Scaramucci. You might think that would make the vain showman who occupies the Oval Office jealous, but you'd be wrong. The Mooch's antics make him Trump's ideal Mini-Me. He's another empty-hatted showboater, loudly distracting the audience from the pickpockets moving among them.

But just to be on the safe side, Scaramucci professes his love for the president loudly and frequently.

In his first few days on the job, Scaramucci has already shown his ability to dazzle and distract the press, turning attention away from the dirty dealing going on all around them. He has incited a showy feud with White House Chief of Staff Reince Priebus, for example, a headline-grabbing move in which he says that the man he once called a "brother" is really only a brother in the "Cain and Abel" sense.

Related Topic(s): Anthony Scaramucci; Banking; Donald Trump; Goldman Sachs; Government Accountability; Government Corruption, Add Tags
Add to My Group(s)
Go To Commenting
The views expressed herein are the sole responsibility of the author and do not necessarily reflect those of this website or its editors.