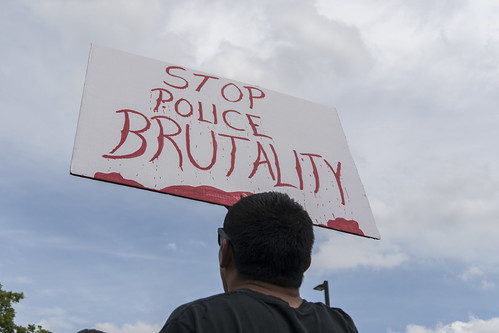 From 1776 forward, Americans have opposed having soldiers do police work on our soil, but in recent years, Pentagon chiefs have teamed up with police chiefs to circumvent that prohibition. How? Simply by militarizing police departments.

Through the little-known 1033 program, the Pentagon has been shipping massive amounts of surplus war equipment to our local gendarmes. This reflects a fundamental rewiring of the mindset now guiding neighborhood policing. Police chiefs commonly send out squads brandishing heavy arms and garbed in riot gear for peaceful situations. Recruiting videos feature clips of SWAT team officers dressed in black, hurling smoke grenades into homes and then storming them, firing automatic weapons. Who wants anyone recruited by that video working their neighborhood?

Let's check the weaponry: more than 93,000 machine guns, 533 planes and helicopters, 180,000 magazine cartridges and 432 Mine-Resistant Ambush Protected vehicles. While it sounds like this could be the U.S. military, it's your and my local police departments patrolling our cities. Remember "Officer Friendly," the beat cops who were known as "peace officers"? The friendlies have largely been transformed into militarized forces, armed with and garbed in war gear, and indoctrinated in military psychology, rather than the ethic of community policing.

Thirty years ago, Congress created the 1033 military transfer program, providing federal grants so chiefs of police and sheriffs could buy surplus firepower from the Pentagon. In a stunningly short time, our local police forces have become macho-military units, possessing an armory of Pentagon freebies ranging from 30-ton tanks to rifle suppressors. They've gone from peacekeeping beats to over-the-top SWAT team aggression, with SWAT teams unleashed on the citizenry tens of thousands of times a year, mainly for ordinary police work.

Corporate arms peddlers, of course, have leapt into direct sales, holding field demonstrations and trade shows to titillate the fancy of police chiefs and other officials. Genasys, for example, makes the long-range sound cannons that are used on protesters, literally blasting away demonstrators with ear-shattering pain. Also, such tear gas makers as CTS are having a field day supplying and resupplying police agencies. Then there's Axon's electrocution guns (which can stop hearts), now on the hip of nearly everyone with a badge.

Militarization is a dangerous and ultimately deadly perversion of the honorable purpose of policing and it is out of control. Most of our states have received suppressors, or silencers to use in surreptitious raids. A sheriff in a North Dakota rural county with only 11,000 people told a New York Times reporter that he saw no need for silencers. When it was pointed out that his department had 40 of them, he was baffled, saying: "I don't recall approving them."

And a city councilman in rural Wisconsin commented when told his police officers were getting a 9-foot-tall armored vehicle, "Somebody has to be the first person to say 'Why are we doing this?'" The New York Times reported that the town's police chief responded, "There's always a possibility of violence." Really? Who threatens us with such mayhem that every burg needs a war-zone armory and a commando mentality?

In 2015, the Obama administration banned many of the military weapons and equipment from being transferred to local police. This came in response to public fury over law enforcement using excessive militarized force against protesters in Ferguson, Missouri, in 2014, after Michael Brown, an unarmed black man, was killed by a white police officer for the crime of jaywalking. However, just two years later, President Donald Trump overturned Obama's ban, returning weapons of war to local police departments including small rural towns and -- get this -- school police departments across the country. Now we're seeing this equipment being used once again against peaceful protesters who are protesting police violence.

Related Topic(s): Militarization; Pentagon; Police, Add Tags
Add to My Group(s)
Go To Commenting
The views expressed herein are the sole responsibility of the author and do not necessarily reflect those of this website or its editors.