Copyrighted Image? DMCA
"I AM NOT A KOOK!"

It's strange that Glen Beck doesn't know anything about the man he's mimicking. It's expected that almost any Christian you meet will not, when questioned, know anything about the history of his own religion, but when a man comes this close to aping a famous personage, you have to wonder whether he's telling the truth or whether he's too stupid to see the resemblance.

The first time I became aware of the comparison of Glen Beck to Father Charles Coughlin was yesterday. Yes, I'll admit that if I had heard Beck more often, the thought would have come sooner, but listening to strange and faulty reasoning makes my head ache. And seeing it on the TV screen accompanied by strange chalkboard charts (and sometimes even stranger guests) makes my stomach gurgle. The eerie comparison was brought about by an article in Crooks and Liars by David Neiwert.

...One of Glenn Beck's favorite claims about the Tea Party movement -- and the surge of right-wing populism that he's leading -- is that it isn't about parties, it's about being American. And being American, of course, means being conservative.

"...you know, we're really at a one-party system at this point. We needed to identify ourselves as one or the other, even though it didn't really make a difference. And that label was much more important than the real label we all should have been wearing, and that is, American.

Progressives have put their agenda now into hyperdrive, and it is so crystal clear that their final goal is anything but American.

Copyrighted Image? DMCA
Sometime in his broadcasting career, Glen Beck decided that the best way to get people to listen to him was to hammer at the prime concepts: "us vs them" "good vs evil" "traditional values vs progressive change" "blue collar vs white collar" and, of course, "American vs. foreigner" (i.e. illegal immigrant) Also along the way: he decided that there was no direct link between his polemics and the actions of his listeners. He washed his hands of all their transgressions. It's time to look at what Beck is getting himself into: the throes of "righteous assassination": Bill O'Reilly had a sense of it after the murder of Dr. Tiller: 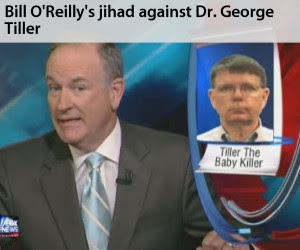 "It's a variation of a Twinkie Defense," said legal expert Jonathan Turley. "They will attempt to connect Mr. Roeder's heavy intake of Bill O'Reilly combined with a talk-radio hate-speak rush to prove that Roeder did not have the capacity to make a rational decision when he shot Dr. Tiller. "The deluge of 'Tiller is a Nazi, mass murderer, baby killer' verbiage by Mr. O'Reilly surely can drive one into a state of what we in the legal profession call 'righteous assassination.'"

Those in the psychology community support the defense.

"Just the fact Mr. O'Reilly has an audience at all gives credence to the point that the so-called Folks™ who watch Bill O'Reilly have a decreasing ability to determine the difference between fact and fiction," said Dr. Hal Densky. "It's a brainwashing of sorts, though with O'Reilly it's more of a complete lobotomy."

The hatred fostered by Father Charles Coughlin of Royal Oak, MI in the 30's may have been incendiary to the point of righteous assassination. We may never know. Because a man with a clerical collar would never be linked to a Jew's death, or a Communist's murder no matter how influential and bigoted his broadcasts.

Ah, that was such an innocent, trusting time, wasn't it?

Father Charles Coughlin was a parish priest for the church The Shrine of the Little Flower, titled after St. Theresa of Liseux, a meek, mild, 19th century Carmelite nun.

I was only about ten when, traveling from Chicago to Quebec on vacation, my folks and I stopped at The Shrine of the Little Flower. The only memory I have of it, is that it was a large church that gave me a strange feeling: I'd never seen an altar placed in the middle of an enormous octagon. The church sat over 3,000 and, looking back, was really the country's first megachurch. And had its own radio evangelist, talking not about God, but about politics.

His office received up to 80,000 letters per week from listeners, and his listening audience was estimated to rise at times to as much as a third of the nation.

On November 20, 1938, two weeks after Kristallnacht, when Jews across Germany were attacked and killed, and Jewish businesses, homes and synagogues burned, Coughlin said "Jewish persecution only followed after Christians first were persecuted."