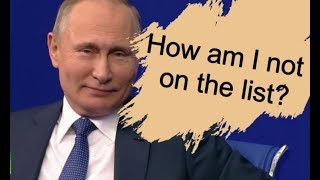 The Russian government, media, and public don't know what to make of the US Treasury's "Kremlin list." The Treasury list contains the names of the top echelon of Russian government and business leadership. The Russians understand that the list is unfriendly and furthers Washington's policy of worsening the relationship between the two major nuclear powers, but beyond that the list seems to be a mystery to them.

President Putin has joked that he is disappointed to have been left off the list. Putin was left off for a reason. The list is directed at him.

On January 30, I explained four of the main reasons for the list.

Here are two more important reasons for the list:

(1) The list is an implicit threat against the business interests of Russian oligarchs, and they understand that. Reports are that many lobbied Washington to get off the list. By suggesting that Washington could curtail the oligarchs' travel to the West, seize their Western-based assets, and prevent Americans and Europeans from doing business with their companies, Washington is telling them to remove their support from President Putin. Washington intends to use the Western-funded NGOs and media in Russia to interfere in the upcoming Russian elections. Washington does not want Putin to have the smashing victory that is expected. It is difficult to make a monster out of a person who has higher public support than any American president in history.

(2) The list is an intended insult to Russia and to President Putin. As a result of Putin's low-key response to past provocations, Washington anticipated, correctly, no response from Putin to Washington's insult to the entire political and economic leadership of Russia. The unanswered insult thus becomes Washington's way of displaying its hegemony over Putin and Russia.

The lack of a meaningful Russian response will encourage more insults and actual sanctions against Putin's supporters, which will cause some of them to separate from Putin in order to protect their own economic and career interests. In the past Washington has used sanctions in efforts to deprive leaders of public support. With the Kremlin list, Washington has changed its tactics and is targeting the reputations and economic interests of the leadership class. The list is Washington's attempt to deprive Putin of the support of the top echelon of government and business leaders. The list is a bullet aimed at Putin's heart.

Such a list is a way of telling Russia that Washington regards Russia as one of Trump's "shithole countries." The list tells Russia that Washington is never going to take any consideration of any Russian interest and that Russia will continue to be punished until it submits to Washington's hegemony, like the UK, Germany, France, Scandinavia, Japan, Canada, Australia, Italy, Spain, and the rest of the servile Western puppet states.

As George W. Bush declared, "You are with us or against us." Being with us means you do as you are told. Russia can either do as she is told or fight. Russia has no other choice.

Related Topic(s): Kremlin List; Vladimir Putin, Add Tags
Add to My Group(s)
Go To Commenting
The views expressed herein are the sole responsibility of the author and do not necessarily reflect those of this website or its editors.