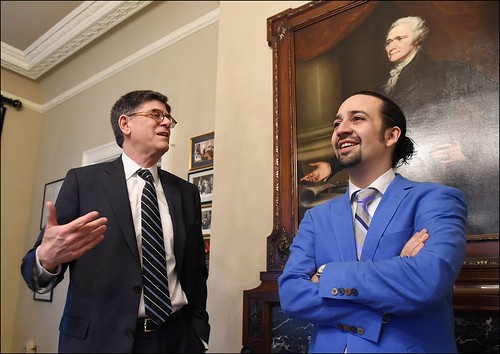 As the economic and humanitarian crisis has worsened in Puerto Rico in recent months, playwright and actor Lin-Manuel Miranda, has given voice in interviews and Op-Eds to the severity of the crisis among ordinary Puerto Ricans. Miranda called the island's debt crisis a matter of "life and death," saying, "I have a lot of family who are struggling in Puerto Rico, that's not an abstract issue to me." He humanizes what the statistics - $73 billion in debt, $19,500 median household income, 11.5 percent sales tax, 64,000 people leaving per year - can not. Puerto Rico is a debt colony whose function as a political entity is to service its creditors. Ironically, Miranda achieved the celebrity he's now using to advocate for the Puerto Rican people by glorifying and aggrandizing the most ruthless champion of creditors in American history.

Miranda has become an elite pop-culture sensation as the creator and star of the award-winning and immensely popular Broadway play Hamilton. The hip-hop musical has been as successful with critics as it has with Broadway theatergoers, dominating the Tony awards and selling out months in advance. The Harvard Business Review argues its $849 tickets are priced too low.

The show's namesake is, of course, Revolutionary War commander, George Washington adviser, and first Secretary of the Treasury Alexander Hamilton. Miranda focuses on the rags to riches story of Hamilton - a poor immigrant who triumphed against all odds by using his intelligence and relentless hard work to fight British oppression and guide his new country to independence and greatness. In My Shot, Miranda's title character raps:

Hey yo, I'm just like my country
I'm young, scrappy and hungry
And I'm not throwing away my shot!

Miranda has praised Hamilton and the other "Founders" for their ability to translate a revolutionary vision into a nation that embodied the liberal principles it supposedly stood for.

"They did a remarkable thing in sticking the landing from revolution to government. That's the hardest thing to do. You can go across the ocean to France, where they totally fucked it up and then got stuck in a cycle of revolution and tyranny," Miranda told Rolling Stone.

Miranda also praised Hamilton's financial program of creating a national debt by assuming the debts of individual states: "His thinking was, if we are entrenched in each other's finances, we're stuck with each other."

The problem with Miranda's reading of history is that he assumes the liberal notion of a united nation, devoted to the common goals of freedom and equality, was any more real 225 years ago than it is today. Post-revolutionary America was never a utopia where everyone shared financially in the spoils of independence. It was a political association organized along the lines of feudal societies and their stark divisions between creditors and debtors.

A wealthy, colonial elite had managed through a massive propaganda campaign to enlist the poor to fight to overthrow British rule. The masses slogged through years battling horrid conditions in the woods and back country to survive combat, hunger, and the elements. They were paid in worthless paper they would later sell to speculators for a fraction of its face value after returning to their farms and their families upon gaining their "freedom."

The landholders and mercantile class had sat by idly as the "exceedingly dirty and nasty people" (in George Washington's words) did the real work of putting their lives on the line. The financiers then used their political connections to try to turn their investments into a profit by not only receiving interest on the paper debt but getting payment on its full value. There was no one more willing to oblige this massive transfer of wealth from common workers and peasants to the elite, ruling class than Hamilton.

The concentration of economic power into the hands of the few was the desired outcome, and the reason for Hamilton's dedication to the federalist political system. As the political battles raged between the federalists (Hamilton, James Madison and others) and the Republicans (Thomas Jefferson and Aaron Burr, who would later kill Hamilton in a duel), Hamilton sought to consolidate power into a centralized state that could enforce the feudal relationship between those who would pay and those who would collect.

As University of Massachusetts Amherst historian Leonard Richards writes in Shay's Rebellion, "(Hamilton) intended to strengthen the national government at the expense of the states by diminishing the ties of state creditors to the states and binding them to the central government. If their future wealth and well-being was linked to the success of the federal government, rather than to the states, their hearts and minds would follow." [1]

Hamilton was not trying to unite citizens together through mutual financial responsibility, as Miranda claimed. He was trying to unite the elites in dependency to the national state. To accomplish this, Hamilton "wanted to reduce - or, better yet, eliminate - the power of states. He also wanted to diminish the influence of farmers and artisans and enhance the power of landlords and merchants," Richards writes. [2]

What became known as Shays' Rebellion in western Massachusetts, in which a popular "regulation" revolted against the state's new political system which had taken power out of the hands of local councils and removed the influence of citizens distant from the financial and political center of Boston, provided a pretext for the Federalists to ram through their centralized national organization of government in order to crush potential future insurrections.

Installed as Treasury Secretary in the new federal government, Hamilton immediately implemented his policy of creating an astronomical federal debt. His solution for providing the money to actually pay these financial promises was the Whiskey Tax.

Related Topic(s): Debt; Economic; Empire; Independence; Law; Rebellion, Add Tags
Add to My Group(s)
Go To Commenting
The views expressed herein are the sole responsibility of the author and do not necessarily reflect those of this website or its editors.