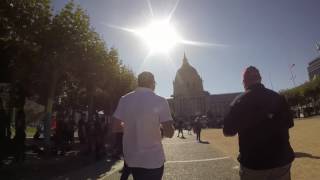 ANTIFA and Counter Protest
(Image by YouTube, Channel: Chris Topaz)   Details   DMCA
An historic opportunity is being missed. The disastrous 2016 presidential election could and should have been a wake-up call. A corrupt political system that gave voters a choice between two terrible candidates is not democracy.

This should have been the signal to face reality. The U.S. political system is totally rotten, contemptuous of the people, serving the corporations and lobbies that pay to keep them in office. The time has come to organize a genuine alternative, an independent movement to liberate the electoral system from the grip of billionaires, to demand a transition from a war economy to an economy dedicated to improving the lives of the people who live here. What is needed is a movement for the pacification of America, at home and abroad.

That is a big order. Yet this approach could meet with wide support, especially if vigorous young people organized to stimulate popular debate, between real live people, from door to door if necessary, creating a mass movement for genuine democracy, equality and peace. This is as revolutionary a program as possible in the present circumstances. A moribund left should be coming back to life to take the lead in building such a movement.

Quite the opposite is happening.

The first step toward preventing such a constructive movement was a false interpretation of the meaning of the Trump victory, massively promoted by mainstream media. This was essentially the Clintonite excuse for Hillary's loss. Trump's victory, according to this line, was the product of a convergence between Russian interference and the votes of "misogynists, racists, homophobes, xenophobes, and white supremacists." The influence of all those bad people indicated the rise of "fascism" in America, with Trump in the role of "fascist" leader.

In this way, criticism of the system that produced Trump vanished in favor of demonization of Trump the individual, making it that much easier for the Clintonites to solidify their control of the Democratic Party, by manipulating their own leftist opposition.

The events of Charlottesville resembled a multiple provocation, with pro- and anti-statue sides provoking each other, providing a stage for Antifa to gain national prominence as saviors. Significantly, Charlottesville riots provoked Trump into making comments which were seized upon by all his enemies to brand him definitively as "racist" and "fascist." This gave the disoriented "left" a clear cause: fight "fascist Trump" and domestic "fascists." This is more immediate than organizing to demand that the United States end its threats against Iran and North Korea, its open and covert project to reshape the Middle East to ensure Israel's regional dominance, or its nuclear buildup targeting Russia. Not to mention its support for genuine Nazis in Ukraine. Yet that trillion dollar policy of global militarization contributes more to violence and injustice even in the United States than the remnants of thoroughly discredited lost causes.

The Left and Antifa

All those who are sincerely on the left, who are in favor of greater social and economic equality for all, who oppose the endless aggressive foreign wars and the resulting militarization of the American police and the American mentality, must realize that, since the Clintonian takeover of the Democratic Party, the ruling oligarchic establishment disguises itself as "the left," uses "left" arguments to justify itself, and largely succeeds in manipulating genuine leftists for its own purposes. This has caused such confusion that it is quite unclear what "left" means any more.

The Clintonian left substituted Identity Politics for the progressive goal of economic and social equality, by ostentatiously coopting women, blacks and Latinos into the visible elite, the better to ignore the needs of the majority. The Clintonian left introduced the concept of "humanitarian war" to describe its relentless destruction of recalcitrant nations, seducing much of the left into supporting U.S. imperialism as a fight for democracy against "dictators."

Antifa contributes to this confusion by giving precedence to the suppression of "bad" ideas rather than to the development of good ones through uninhibited debate. Antifa attacks on dissidents tend to enforce the dominant neoliberal doctrine that also raises the specter of fascism as pretext for aggression against countries targeted for regime change.

Antifa has several favorite arguments to justify itself to those who criticize its use of force and intimidation to silence its adversaries.

1. Its violence is justified by the implicit violence attributed to its chosen enemies who, if left alone, plan to exterminate whole groups of people.

This is demonstrably untrue, as Antifa is notoriously generous in distributing the fascist label. Most of the people Antifa targets are not fascists and there is no evidence that even "racists" are planning to carry out genocide.

Related Topic(s): Antifa; Fascist; Politics; Violence, Add Tags
Add to My Group(s)
Go To Commenting
The views expressed herein are the sole responsibility of the author and do not necessarily reflect those of this website or its editors.

The Harmful Effects of Antifa