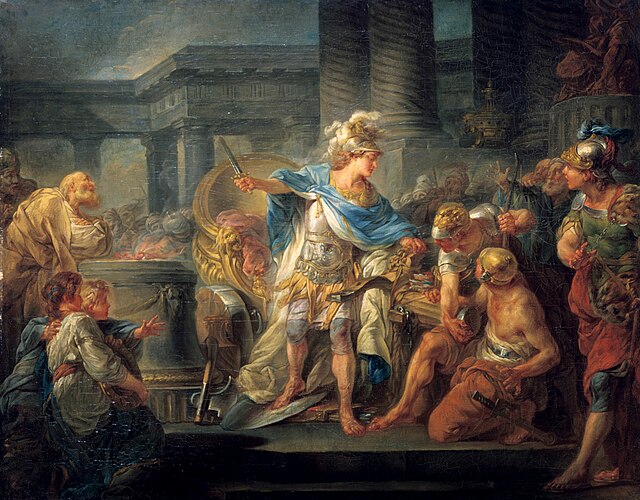 Immigration is a terrible, but global problem. The most serious challenge to America is climate change. Poverty and violence are proximate, visible causes of immigration, but sped-up climate change is the ultimate cause. Another challenge, to the Miser - Billionaire "Washington Economic Consensus," is automation. It's labor saving, an irresistible motive. It inevitably reduces total wages! It can't be powered other than by electricity. And electricity is created by that greatest labor saver [climate changing] combustion of fossil fuels.

This is a Gordian Knot. It is choking the world's poor. At least 40% live near enough to coasts that the processes of climate change are shortening their lives. Fisheries diminish, wind storms crush and drown, land desiccates, fires, etc. The Gordian Knot myth promoted a ruling class benefit. Alexander's cutting it somehow enabled his going on to conquer the known world. Can we unravel the knot somewhat and enable more humans to survive better and longer?

For beautiful but stark reminders of how unevenly distributed human populations are, see the website Microcosm. It also shows the flows of refugees. On the surface, the maps show that the population density of North America is vastly less than that of areas from which immigration comes, but also that there is more immigration from Asia to the U.S. than from south of our borders. Climate implicated drought in the U.S. refutes any simplistic" resettle 'em" here solution.

Trump's bankrupt nationalist ideology: Build a wall? And then what? Provide American "Free Stuff" to "invaders" so long as it's south of our border? Beef up just our own infrastructure? Tropical [wind] waves from Africa strike us as hurricanes. What happened to helping others where they live, as (in part) did the Green Berets? Couldn't U.S. policy reach arrangements with Honduras, etc. "surging" U.S. troops for community development and gang suppression?

There's an outside chance the Knot might still be loosened starting with automation. Extreme Republican dominance has entrenched money scarcity Yo-Yo Libertarianism so thoroughly the federal government is nearly totally gridlocked. ("Yo-Yo Libertarianism" means "You're on your own," self -- reliance and all similar Reaganomics.) Modern Monetary Theory (MMT) enables such a liberation of budgeting it could assure that every American had a stable source of income adequate to their needs.

MMT starts with the obvious fact that nations that are sovereign over their fiat currency, such as the U.S. create all legitimate money and can create as much as there is political will for any purpose, such as Social Security, health care for all, etc. Almost all of this money is only "units of account," not "spending money." Thus an Appropriations Committee can simply resolve to create and deposit in the Social Security Trust funds a sum of units of account that guarantee the fund's coverage of payments due for any length of time. It doesn't have to get that money from taxation! Nor need there be any hyperinflation from such activity. In fact, the conservative Cato Foundation's main authority on inflation, Steven Hanke, has written that there has never been an instance of hyperinflation in America, not even when government has "printed" Continentals or Greenbacks.

National houses divided against themselves have stood, more or less unhappily, for long periods of time. Some of our culture war wedge issues have become severe enough dividers (e.g., guns and abortion) as to suggest, at least temporary, 10th Amendment solutions. The shrillest advocates of "choice" and " life" would both condemn one such 10th. Amendment proposal. Is returning to a measure of rational consensus to break gridlock a compelling enough reason to enact this? Suppose there is enacted a restricted definition of "commerce," excluding abortive medical procedures, and a federal guarantee of enforcement of the right of any citizen to travel from any state to any state to perform there any act legal in the destination state. State legislatures could choose choice or life, and state residents could fight to choose legislators who will make their state's law reflect their wishes. It's doubtful getting to cross state lines is an undue burden for a woke feminist movement. A similar situation exists now with the federal Medicare supplement passed with Obamacare that some state governments simply won't take.