Even Trump now senses that the electorate wants a 2020 candidate who takes climate change seriously. 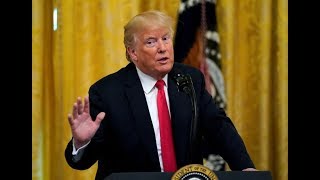 It's hard to find the nuggets of good news in the media these days. Many people are so burnt out on the Trump news roller-coaster, which goes around the clock, changes frequently, and often shocks and outrages, that the least painful option is to skip the news entirely.

Here's some good news: Americans are starting to wake up about the climate crisis.

More than half of Americans believe human-caused climate change is happening. More than six in 10 Americans disapprove of Trump's record on the climate. And while only 6 percent of Republicans see climate change as the single most important issue in the 2020 election, 27 percent of Democrats believe that it is.

It appears that the debate over the climate is shifting. Trump recently made an (awkward, cringey) speech about the environment, touting his own environmental record and falsely claiming -- lying, really -- that the U.S. is outperforming other nations in reducing greenhouse gas emissions.

For the record, the Trump administration stripped scientific climate data off government websites, pulled out of the Paris accord, and rolled back Obama-era fuel efficiency standards on vehicles. Yet now, he's out talking about his excellent record on the environment? I suppose it's good that he thinks he needs people to believe he has a good record there even if that's not a test he can pass by any measure.

In his speech, Trump expressed opposition to Alexandria Ocasio-Cortez's proposed Green New Deal, which aims to provide both good climate policy and economic stimulus together. But it's a notable shift that a man who previously referred to climate change as a "Chinese hoax" now feels the need to engage with a progressive plan to take it very seriously.

This does not indicate that Trump himself, or his administration, is ready to take the kind of action on climate that we need. But it does hint that the electorate will be looking for a candidate in 2020 who will.

The voluminous array of Democratic presidential candidates are now competing with one another on their climate platforms. Most support holding a debate devoted entirely to climate change. That energy could infect races for Congress, too.

It's unlikely that a zebra like Trump will change his stripes on climate at this point, but it is hopeful that the American people are demanding that leaders take action so much that Trump feels pressured to claim a successful environmental record.

And it's even more hopeful because we live in a democracy where we have the ability to elect leaders who can deliver on the issues we care about every two to four years if we make them.

Jill Richardson is pursuing a PhD in sociology at the University of Wisconsin-Madison.
Related Topic(s): Environmental Degradation; Speech; Trump Against Climate Change, Add Tags
Add to My Group(s)
Go To Commenting
The views expressed herein are the sole responsibility of the author and do not necessarily reflect those of this website or its editors.