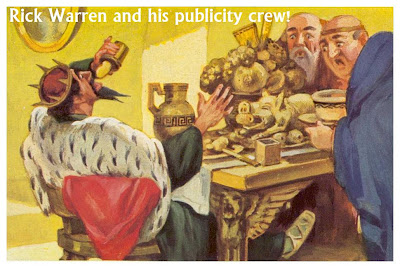 Rick Warren proved to himself that he is still has the Midas Touch: he turned a plea for $900k into $2.5+ and publicity gold. For that feat he should be lionized, I guess. The problem with glorifying a"man of God" like Warren, however, is that it tends to cover up the real person. But perhaps, that is why Warren wants to be lionized. He preaches, converses, and lies in vague generalities. He causes more confusion than clarity with his explanations and backpeddling: after he insisted that no "fat cats" were involved in the donations, the matter of who gave what is still unclear:
Cathy Lynn Grossman, USA Today:

The potential size of the pool of givers is also confusing. Outreach Magazine lists Saddleback with 22,000+ in weekend worship attendance. But remember, not everyone goes every Sunday; not everyone who goes is a "member" (which Saddleback, like many conservative evangelical churches, reserves for people who have taken classes in discipleship and committed to joining the church); and not every member goes.

At virtually every Saddleback church service, a disclaimer is made from the platform and reinforced in the bulletin to the effect that, "if you are not a member or regular attender who considers this your church home, you are our guests - please do not feel compelled to give." So, by posting the Intranet letter addressed to church family on the church blog, it is akin to the plate passing a visitor by in the pew -- it is an appeal intended for members only, giving them an opportunity to minister through giving.

Hmmm. I know many who consider themselves "normal people" but not "one thousand bucks"-normal people. 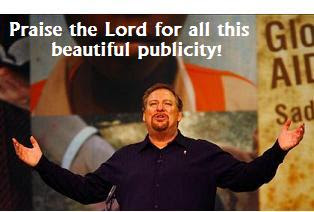 
"Why" is easier to explain than "how." We've experienced Warren's sweeping generalizations before: "For 5 thousand years in every culture and society, marriage has always been between one man and one woman." This statement insults educated people, of course, but Warren isn't interested in reaching educated people. So a huge subjective number like 200,000 serves Warren's agenda quite well: is there anyone out there who dares to go against such a number?

Furthermore, counting 200,000 homeless and hungry people is almost impossible given the situation: if, as Warren says, most of the money will go to helping the homeless, there is no way to track the money. You can't go to every park and public building and ask the homeless what ministries or churches they've been fed from today. And those faith-based agencies are notorious in having their programs overlap. It's the same with his "AIDS programs" here in the States. He says that they are inclusive of gays, but no one has come forth to verify it.

And the $900,000 shortfall: he said that 50% of Christmas donations were off because of the economy. Citing the obvious (which would have been expected over six months ago), Warren acted like it was some great surprise. If it was, he's got the dumbest marketing team on the planet. And considering the size of his congregation and Saddleback's yearly gross (over $150 million), $900,000 is not a great sum of money.

So as usual, Warren's actions and reactions bring up questions; more than he's willing to answer, or answer with credibility. One comment to an ABC.com article summed it up nicely:

Amazing. We will call up and pledge money to a stranger who claims to have an inside track to God and leave a neighbor out cold in the street...

Rev. Dan Vojir is has been writing/blogging on religion and politics for the better part of ten years. A former radio talk show host (Strictly Books " Talk America Radio Network) and book publisher, Dan has connected with some of the most (more...)
Related Topic(s): Humanitarian Aid; Mega-Churches; Religion And Spirituality; Religion And Values; Rick Warren; Rick Warren; Saddleback, Add Tags
Add to My Group(s)
Go To Commenting
The views expressed herein are the sole responsibility of the author and do not necessarily reflect those of this website or its editors.