Last month, on the 80th anniversary of the start of World War II, the European Parliament voted on a resolution entitled "On the Importance of European Remembrance for the Future of Europe." The adopted document:

"Stresses that the Second World War, the most devastating war in Europe's history, was started as an immediate result of the notorious Nazi-Soviet Treaty on Non-Aggression of 23 August 1939, also known as the Molotov-Ribbentrop Pact, and its secret protocols, whereby two totalitarian regimes that shared the goal of world conquest divided Europe into two zones of influence; Recalls that the Nazi and communist regimes carried out mass murders, genocide and deportations and caused a loss of life and freedom in the 20th century on a scale unseen in human history, and recalls the horrific crime of the Holocaust perpetrated by the Nazi regime; condemns in the strongest terms the acts of aggression, crimes against humanity and mass human rights violations perpetrated by the Nazi, communist and other totalitarian regimes."

For 75 years, we have been told that the war started on September 1st, 1939 when Germany invaded Poland, even though the Pacific Theater between Japan and China began two years earlier. Now we are to understand that it actually began eight days prior when the German foreign minister visited Moscow. Take no notice of the inherent doublespeak in the premise that a war could be the consequence of a peace agreement, which without any evidence provided is said to have contained "secret protocols", not provisions. You see, unlike the other pacts signed between European countries and Nazi Germany, such as the Munich Betrayal of 1938 with France and Great Britain to which the Soviets were uninvited while Austria and Czechoslovakia were gifted to Hitler for the courtesy of attacking Moscow, Molotov-Ribbentrop was really a confidential agreement between Hitler and Stalin to conquer Europe and divide it between them.

This is pure mythology. The fact of the matter is that neither the Soviets or even Germany drew the dividing line in Poland in 1939, because it was a reinstatement of the border acknowledged by the League of Nations and Poland itself as put forward by the British following WWI. Even Winston Churchill during his first wartime radio broadcast later that year admitted:

Yet according to the EU, even though Moscow was the last country to agree to a peace deal with Hitler, it was all part of a hidden plot between them. In that case, why then did Germany chose to invade the USSR in 1941? The EU leaves this question unanswered. Forget about its racial policies of enslaving Slavs or that Hitler openly declared in Mein Kampf that Germany needed to conquer the East to secure the Lebensraum . Nevermind that in the Spring of 1941, less than two months before Operation Barbarossa, Stalin gave a speech to the Kremlin at a state banquet for recent graduates of the Frunze Military Academy to give warning of an imminent attack:

"War with Germany is inevitable. If comrade Molotov can manage to postpone the war for two or three months through the Ministry of Foreign Affairs, that will be our good fortune, but you yourselves must go off and take measures to raise the combat readiness of our forces." 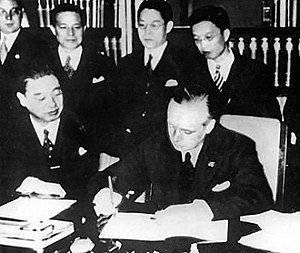 The EU has redacted that the entire reason for the signing of the Nazi-Soviet pact in August 1939 had been to buy time for the Red Army's attrition warfare strategy to adequately prepare its armaments against a future invasion by the Wehrmacht. The Soviet leadership well understood that Germany would eventually renege on the agreement, considering that in 1936 it had signed the Anti-Comintern Pact with Japan and Italy directed at the Communist International. For six years, the USSR was thwarted in its attempts to forge an equivalent anti-fascist coalition and to collectively defend Czechoslovakia by the British and the French, whose ruling classes were too busy courting and doing business with Germany. It had been the Soviets alone who defended the Spanish Republic from Franco in the final rehearsal before the worldwide conflict and only when all other recourses had run out did they finally agree to a deal with the Hitlerites.

Just a week prior to the signing of the neutrality treaty, Stalin gave a secret speech to the Politburo where he explained:

"The question of war or peace has entered a critical phase for us. If we conclude a mutual assistance treaty with France and Great Britain, Germany will back off of Poland and seek a modus vivendi with the Western Powers. War would thus be prevented but future events could take a serious turn for the USSR. If we accept Germany's proposal to conclude with it a non-aggression pact, Germany will then attack Poland and Europe will be thrown into serious acts of unrest and disorder. Under these circumstances we will have many chances of remaining out of the conflict while being able to hope for our own timely entrance into war."

This latest resolution is part of a long pattern of misrepresentation of WWII by the Anglo-Saxon empire, but is perhaps its most egregious falsification that truly desecrates the graves of the 27 million Soviet citizens who were 80% of the total Allied death toll. Earlier this year, for the commemoration on the 75th anniversary of the Normandy landings, Russia and its head of state were excluded from the events in Portsmouth, England. As if the ongoing absence of Western European leaders from the May 9th Victory Day ceremonies held annually in Russia weren't insulting enough, while it's true that the Eastern Front was not involved in Operation Overlord, Russian President Vladimir Putin had previously been in attendance at the 70th anniversary D-Day events in 2014. No doubt the increase in geopolitical tensions between the West and Moscow in the years since has given the EU license to write out Russia's role in the Allied victory entirely with little public disapproval, though many of the families of those who volunteered in the International Brigades were rightly insulted by this tampering of history and voiced their objection.

The EU motion's real purpose is to fabricate the war's history by giving credit to the United States for the liberation of Europe while absolving the Western democracies that opened the door for the rise of fascism and tried to use Germany to annihilate the USSR. History itself should always be open to debate and subject to study and revision, but the Atlanticists have made this formal change without any evidence to support it and entirely for political purposes. Like the founding of the EU project itself, the declared aim of the proposal is supposedly to prevent future atrocities from taking place, even though the superstate was designed by former Nazis like Walter Hallstein, the first President of the European Commission, who was a German lawyer in several Nazi Party law organizations and fought for the Wehrmacht in France until his capture as a POW after the invasion of Normandy.

Rather than preventing future crimes, the EU has committed one itself by deceptively modifying the historical record of communism to be parallel with that of the Third Reich. Even further, that they were two sides of the same coin of 'totalitarianism' and that for all the barbarity committed during the war, the Soviets were equally culpable or judging by the amount of times the text cites the USSR versus Germany, even more so. It remains unclear whether we are now to completely disregard the previous conclusions reached by the military tribunals held by the Allies under international law at Nuremberg of which all 12 war criminals sentenced to death in 1946 were German, not Soviet. The document doesn't even attempt to hide its politicized direction at the current government in Moscow, stating that:

"Russia remains the greatest victim of communist totalitarianism and that its development into a democratic state will be impeded as long as the government, the political elite and political propaganda continue to whitewash communist crimes and glorify the Soviet totalitarian regime."

This accusation does not stand up to critical observation, as Russia has since erected official memorials to those executed and politically persecuted during the so-called 'Great Terror.' However, the stark difference between the EU resolution and the Wall of Grief in Moscow is that the latter is based on evidence from the Soviet archives. It has become a widespread and ridiculous belief in the West that Stalin somehow killed as much as five times as many people as Hitler, an absurdity not reflected in the now disclosed and once highly secretive Soviet archives, which after two decades of examination show that over a period of three decades from the early 1920s to his death in 1953, the total recorded number of Soviet citizens executed by the state was slightly less than 800,000. While that is certainly a horrid number, how does it even begin to compare to an industrial scale extermination based on the race theory?

MAX PARRY, is a Contributing Editor of The Greanville Post.  He is an independent journalist and geopolitical analyst.  His writing is committed to an anti-war, anti-capitalist and anti-imperialist perspective in (more...)

Related Topic(s): Hitler; Jews; Russia Bashing; Stalin, Add Tags
Add to My Group(s)
Go To Commenting
The views expressed herein are the sole responsibility of the author and do not necessarily reflect those of this website or its editors.

30 years after Tiananmen Square, the U.S. is still trying to destabilize China

The EU is Rewriting WWII History to Demonize Russia

How the Pro-War "Left" Fell for the Kurds in Syria