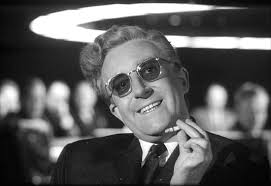 Our Afghan Dr Strangelove - Great Game chessmaster
(Image by Bushwick inlet park)   Details   DMCA
The attempted coup in Venezuela looks like it might be the brainchild of Zalmay Khalilzad, now back in the American jihad driver's seat. ZKh's counterinsurgency thoughts in The Envoy about Iran fit the bill.

"Washington," he writes boldly, "had a contradictory policy on Iran. It spoke loudly against Iran, and it refused to talk with Iranians." He was frustrated as ambassador to Iraq 2004-7, alert to the instability that the US occupation had caused, the horrendous deaths from the defection to the rebels of fired Iraqi army soldiers/ officers.

The humiliated soldiers were pushed into the hands of the hastily founded Al-Qaeda in Iraq (AQI) by the US after disbanding the Iraqi Army. There had been no al-Qaeda before the invasion. The US created it, whether by bungling (or to play the devil, Israeli-style).

Iran was willing to negotiate to help quell the chaos, and was spurned. It was the same during and after 9/11, when both Iran and Russia reached out to the US and offered full cooperation. Russia was fine, at least for the moment. (It was vital to get US forces through Russia to invade Afghanistan, and bases in the ex-Soviet 'stans'.)

But, again, Iran's (very valuable) offer of help was snubbed. One thing ZKh is not, is stupid. He knows his life in Iraq and the future of Iraq would have been far better with Iran's cooperation. Ditto Afghanistan. He kept asking in both places and was ignored. Good for you, Zal.

In Iraq, Iran wielded/ wields much more power than the US ever will, whether or not the US makes friends. But ZKh also knows Iran is very very eager for an end to sanctions and normalization of relations.

The US embassy in Tehran lies empty apart from some fabulous anti-imperialist murals. Rather than it remaining as a museum of the revolution, the US has a win-win: get its embassy back, and close a pilgrimage site honouring the Iranian revolution. Its return to the embassy would be welcomed by almost all.

Talks would offer the prospect of influencing Iran, as opposed to now, when the US forces Iran to dig in its heels in the face of Venezuela-coup-style economic war, complete with MEK taking the role of the coup-makers in Caracas.

[SCIRI leader] Hakim then traveled to Iran and met with Ayatollah Khamenei. He convinced the ayatollah that a dialogue between the US and Iran was in the interest of Iraq, Iraqi Shia, and Iran itself. Khamenei wanted to talk about all the issues dividing the US and Iran. " For reasons unclear to me, Washington did an about-face.

Khamenei was needlessly insulted and concluded the US could not be trusted. ZKh was not amused. So he took things into his own hands, Afghan-style:

General Casey and I decided to target Iranian Quds Force officers when they traveled to Iraq.

They arrested one at Hakim's residence and took him in for interrogation. Hakim was furious, but ZKh told Hakim he was a powerful political leader.

Related Topic(s): Al-Qaeda; Counterinsurgency; Donald Trump; Instability; Invasion; Iran; Iran Russia Alliance; Iraq; Venezuela Oppositions Terrorism, Add Tags
Add to My Group(s)
Go To Commenting
The views expressed herein are the sole responsibility of the author and do not necessarily reflect those of this website or its editors.