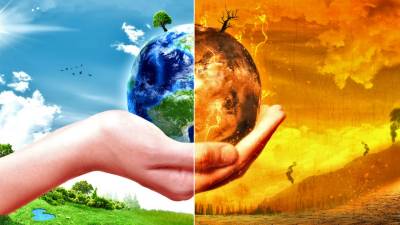 Climate Change: How Technology can reduce the disaster
(Image by timesofislamabad.com)   Details   DMCA

As I knew would happen, my review of the very serious and heavily documented book, Unprecedented Crime, resulted in condemnations from the fossil-fuel industry's trolls and from libertarians who think that global warming is a scheme for government to seize more power over private industry. Personally, I wish the fossil-fuel trolls and libertarians were correct, but there is scant, if any, evidence on their side. I must say that I am discouraged that the oligarchs' disinformation campaigns are again taking precedence over fact.

Global-warming deniers, which include honest, non-ideological people, say that the planet has been subjected to many warming and cooling periods, and that it is only natural that the cycles are continuing. Climate scientists know this very well, and that is what disturbs them. The fact that the planet has warmed and cooled before does not mean that there is no danger.

Searching around for a simple explanation for readers, I found this report from a CNN meteorologist in 2015. (Note that the 0.85 centigrade rise in temperature in the report is, only three years later, up to 1.1C.)

The real question is: why are man-made greenhouse emissions since about 1880, the onset of the industrial era, more dangerous than those of the Milankovitch Cycles? The answer is: the speed of change.

Here is the gist of the CNN report...

Scientists understand the natural processes behind the previous warm and cold periods that lead to ice ages. They occur in regular patterns called Milankovitch cycles. These cycles occur because the Earth's orbit around the sun is not constant.

The shape of the orbit changes, the tilt of the Earth on its axis changes and even the direction of the axis changes over time. All of these changes result in varying amounts of energy (i.e., heat) that the planet receives from the sun. That, of course, determines how warm or cold the planet becomes.

While these cycles do impact Earth in much the same way as we are seeing now, they happen very, very slowly.

These cycles take place on 100,000 year time frames, and the amount of warming we have seen, even though it is "only" about 1.5 degreesF (0.85 degrees C) since 1880, would take many thousands of years to occur if the process were occurring purely naturally. Also, when you plot these orbital cycles out, we should be in a "cooling" phase of the cycle -- not warming.

But again, when these changes are occurring naturally, they take thousands to tens of thousands of years to occur, whereas humans have caused this to occur in just over 100 years. In fact, humans have pushed the level of carbon dioxide in our atmosphere to levels not seen in millions of years. The last time levels were this high, sea levels were several meters higher and temperatures were several degrees warmer.

So yes, the climate changes naturally, in much the same way it is changing now, but it happens much, much slower. That in turn gives the Earth, and its various life forms, time to adapt. When these changes occur rapidly, you can have mass extinctions.

Here is another explanation of the difference.

Today the world is rushing to destruction on two fronts. One is human-induced climate change, a threat that the fossil-fuel industry and its hired guns have managed to hide from the public and the unfortunate President Trump. The other is the rush to nuclear war that the alliance of the Democratic Party, the Zionist Neoconservatives, and the military/security complex has unleashed.

It is extraordinary how little attention these threats receive.

Related Topic(s): Climate Crisis; Milankovitch Cycles; Scientists, Add Tags
Add to My Group(s)
Go To Commenting
The views expressed herein are the sole responsibility of the author and do not necessarily reflect those of this website or its editors.