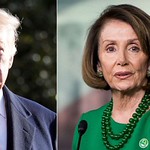 According to Senator Lindsey Graham (R-SC), if Donald Trump gives up on his demand for funding for his border wall, his presidency is effectively over. He is not wrong.

Trump's promise of a southern border wall was the centerpiece of his campaign for President. The prospect of a "great wall on our southern border" that would hold at bay the imaginary hordes of brown-skinned drug dealers and rapists, energized the racists and xenophobes that are among his most loyal supporters. The climax of his rallies was (and still is) the feverish chants of "Build the wall!" If he fails to deliver on the wall's construction it would expose him as weak and ineffective.

But the stakes are equally as high for the Democrats. The midterms - which gave them to a strong majority in the House - was a repudiation of everything Trump stands for, including his ill-conceived wall. The election to the House of the first-ever Muslim woman, first Somali-American, first Native American women, and an unprecedented number of Latina and African-American women are a direct result of Trump's toxic racism, sexism and paranoid xenophobia.

If the Democrats were to cave now it would be a betrayal to the droves of voters who turned out to reject Trump's vision for America. Lindsey Graham's claim that Trump has a mandate to build the wall is wrong. While Trump did win the election, he received 3,000,000 fewer votes than Clinton and the blue wave that swept Democrats into power is a clear indication that they have the mandate - a mandate to reject Trump's irrational policies.

Trump's recent threat to do an end run around Congress and declare a national emergency is just a distraction, and as such, the Democrats should ignore it.

Politics aside, the wall has always been more of a campaign slogan than serious policy. Undocumented immigration has been falling steadily for years and experts estimate that approximately half of undocumented immigrants enter through official crossings using fake documents, are smuggled through, or simply overstay their visas. A wall would do nothing to prevent this.

Nor would the wall would do much to prevent immigrants from crossing outside of official crossings. Even Trump, in one of his 'instinctual' moments, where even he does not know what is coming out of his mouth next, explained exactly why the wall would be utterly useless. First claiming that no one would ever try to climb the wall with a ladder 'because there would be no way down' he then inadvertently stumbled into the obvious solution: 'well maybe a rope'.

Perhaps the most important reason to oppose the wall is that it would be a repudiation of so much of what we stand for as a people. We are largely a nation of immigrants, who came here for freedom from oppression and for economic opportunity. The wall would be a negation of our values - a monument to racism and xenophobia and the antithesis of our Statue of Liberty, which for so long has exemplified our moral inclination to help the poor and oppressed.

This is the most important political clash of this presidency. The Democrats must not cave in. If Trump wins, he will gleefully get his mission-accomplished photo op, his base will be energized, the democrats that voted in the midterms will have been betrayed, and billions of dollars will have been wasted on a useless wall. If the Democrats hold firm they will save billions of dollars, fulfill their mandate to resist Trump's bigoted impulses and preserve America's standing as a champion for the downtrodden and oppressed.

Scott Devlin is a freelance writer with a focus on political analysis and outdoors adventure writing. Scott formerly served as a Combat Rifle Team Leader in the U.S. Army, has degrees in Philosophy and Biology and has two wonderful children. (more...)

Related Topic(s): Internet Shutdown Or Censorship; Shutdown; US Govt Shutdown, Add Tags
Add to My Group(s)
Go To Commenting
The views expressed herein are the sole responsibility of the author and do not necessarily reflect those of this website or its editors.

The Myth of the Master Negotiator

The Democrats Must not Cave In

Trump is the Real National Emergency