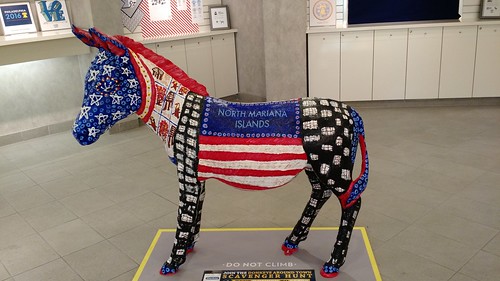 As we celebrate and savor President-elect Joe Biden's victory over Donald Trump, we must also be cognizant that, despite record voter turnout, the 2020 election did not bode as well for Democrats as it could have.

Two years ago, a "blue wave" ushered in a Democratic House majority and seats at the state and local levels that defied odds.

And while it seems Democrats will maintain that majority, it could turn out to be the thinnest in two decades.

This election, Republicans won almost every toss-up seat and picked up six more.

Democrats did not flip a single statehouse and lost some seats in Congress.

The embarrassing returns (other than giving Trump his walking papers) should be a wake-up call for Democrats to heed their progressive base.

Instead, they're already fomenting a mid-term bloodbath by sprinting to the middle in an earnest endeavor to demonstrate their "bi-partisanship".

Some are warning Biden not to make the same mistake Barack Obama did for eight years-- capitulating to industry fat cats and intransigent Republicans whose sole objective was to make him a one-term president.

Joe Biden is the same man who stated five months ago, if elected, "nothing would fundamentally change."

Despite releasing the most progressive climate and economic plan of any Democratic nominee in modern American history, and proposing a cabinet- or senior adviser-level "Climate Chief" position, Biden still refuses to ban fracking, triggering climate activists to aggressively push back against his pick to head the White House Office of Public Engagement for his ties to fossil fuel industry donors.

He is vague on how he would respond to a Medicare-for-All bill should one pass both houses of Congress and land on his desk for a signature.

His list of possible cabinet picks is conspicuously light on progressive names.

For all the ways progressives like Sens. Bernie Sanders and Elizabeth Warren have succeeded in moving Joe Biden further left, we are kidding ourselves if we think he's going to stay there if not met with relentless pressure.

We are also kidding ourselves if we believe disguising ourselves as Republicans dressed in Democrats' clothing is going to produce anything other than a Republican rout in 2022 and a President Tom Cotton or Donald Trump redux two years later.