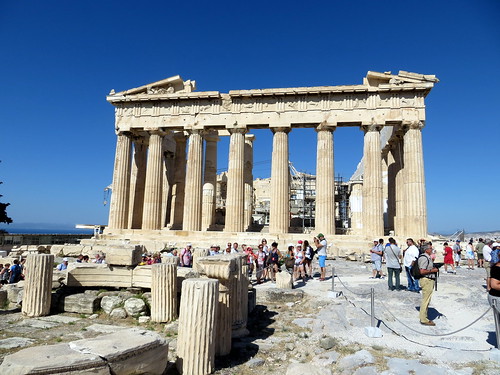 Classics departments, specializing in the studies of ancient Greek and Latin cultures and languages, have been targeted as useless for generations, at least a century in some instances.

As a high school student, I would have laughed at the idea of majoring in classics, yawning my way through Latin classes that came so easily to me. But I ended up minoring in classics in college and then majoring in them as a graduate student. What happened that such an about-face occurred within three years?

In college once I was pressured to find a major subject and couldn't find one beyond studying every foreign language I could, I had to invent my own major that wasn't offered at my college, linguistics. Then I studied that field like hell, thirsting for origins of everything in a way that I could, through ancient languages. I studied Akkadian, then Latin and ancient Greek, along with Indo European linguistics, where I pored over a glossary of roots in search of Truth. The Truth I found was that our civilization was based on violence. At the root of Indo European epic poetry, one linguist found, was the simple sentence "X struck Y."

That discovery came decades after my time in graduate school, though. Sooner than that, I found another truth in a seminar on Homer's Odyssey, that the ultimate contentment in life was subsumed in one word, empedon, which embodies home, stability, sanity, wealth, and marital fidelity. Odysseus slaughtered countless suitors of his wife to regain all those elements he had given up under pressure to join Greek fleets in pursuit of the cherished glory of excelling in battle. He struggled for ten years to regain the empedosyne (state of being empedon) he had lost to join Agamemnon's army fighting for his brother's humiliation in having lost his wife to the allurements of the handsome seducer Paris of Troy.

(I have published details of my master's thesis on this theme at OEN.)

And so I discovered Truths: the basis of society and everything a person could want summed up in a word, by studying classics. The farthest thing from my mind is that my studies were based on a culture of White supremacy: they weren't.

The Black Ethiopian Memnon, praised for his prowess in battle and felled by no one less than Achilles, the best of the Achaeans, spared old Nestor when he came up against him on the battlefield though he had killed his son Antilochus.

One can argue that the Homeric epithet "white armed" of lovely women was racist. And a movement has emerged to do away with the field altogether, reflected on the Princeton campus, site of a world-class classics department, by the push to eliminate the language requirement from the study of classics, so that all the ancient works would be read in translation.

This is the quintessence of the generations-long process of whittling away at classics departments and requirements. There are eloquent arguments on both sides of the controversy, which boils down to me, in their own quintessence, as ultimately abolishing the process of reasoning, which first flourished in its own right in the Enlightenment after recovery of the study of the classics during the Renaissance. Reasoning was born in ancient Greece, one can argue, and it is accepted that ancient Greece, along with ancient Rome and Judea-Christianity, form the basis of Western culture.

Certainly irrationality and anti-intellectualism are circulating, along with the subjective rewriting of history according to a bigoted system of values, by right-wing populations. This push was articulated by Trump when he asserted that he loves uneducated people. The drive toward abolishing the study of classics is a left-wing pursuit. And so both sides surround the field menacingly. Will it survive? Should it survive?

It depends on what you value and how you think that civilization should move forward.

In my own unbigoted life pursuits, classics was a boon to my thinking and orientations. Reasoning led me to the conclusion that racism is intolerable, as Cicero once argued: "denying foreigners access to our city is patently inhumane," but ancient authors also recount the expulsions of whole 'suspect' populations, including a roundup of Jews in 139 B.C., who were not considered 'suitable enough to live alongside Romans'" (quotation from a New York Times article, Feb. 2/Apr. 25, 2021, on the left-wing drive toward eliminating classics as an academic discipline, first brought to public attention by the brilliant Black scholar Dan-el Padilla Peralta of Princeton University).

In the New York Times article, Padilla says that his own pursuits may ultimately lead him out of academe into politics. I wonder if this recapitulates the future of academe altogether. Can we say that Padilla's intellectual roots in the classics led him to reject them? Would he have reached his conclusions without them?Philosophy and the classics are the abstract pursuits that are arguably the quintessence of intellectualism and the Ivory Tower. The earliest universities were centered on theology but also logic.

So I'm exploring the future of the academy as we know it and the future of reason as the bases of "civilization." What will replace it? Chaos or something wonderful? I guess I'll never know. I hope that its roots are peaceful, not violent, as we start all over again.

Related Topic(s): Classics; Debate; Future, Add Tags
Add to My Group(s)
Go To Commenting
The views expressed herein are the sole responsibility of the author and do not necessarily reflect those of this website or its editors.