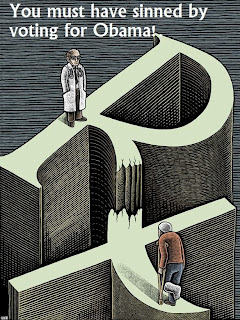 Defenestration: to throw something or someone out of a high window, hence the term, "out the window" The most famous defenestration was the Defenestration of Prague, when Protestants threw the Catholic emissaries out of the castle window, starting the Thirty Years War. Defenestration was also a favorite form of execution of Bohemia. It is conjectured that statesman Anton Masaryk was executed by the Communist Party by being thrown out the third story of the Czernin Palace.

These days, throwing something out the window is to eradicate or nullify it. We throw things "out the window" every day: a diet, an idea, a promise. An oath.

These days, doctors are no longer required to take the Hippocratic Oath. That's primarily because the Oath has evolved to suit a society's needs and a culture's norms. For example, the original Oath started thusly:

I swear by Apollo, the healer, Asclepius, Hygieia, and Panacea, and I take to witness all the gods, all the goddesses, to keep according to my ability and my judgment, the following Oath and agreement:

I swear by Apollo the Physician and Asclepius and Hygieia and Panaceia and all the gods, and goddesses, making them my witnesses, that I will fulfill according to my ability and judgment this oath and this covenant:

I swear to fulfill, to the best of my ability and judgment, this covenant:

Rev. Dan Vojir is has been writing/blogging on religion and politics for the better part of ten years. A former radio talk show host (Strictly Books " Talk America Radio Network) and book publisher, Dan has connected with some of the most (more...)
Related Topic(s): Healthcare; Healthcare; Healthcare Reform; Hippocratic Oath, Add Tags
Add to My Group(s)
Go To Commenting
The views expressed herein are the sole responsibility of the author and do not necessarily reflect those of this website or its editors.