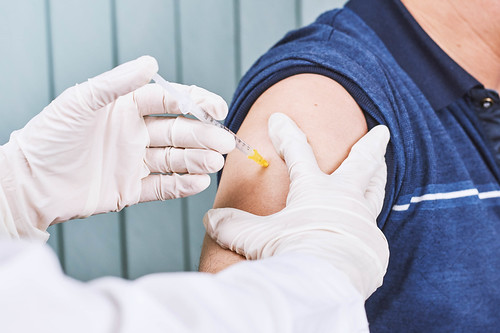 Getting vaccinated against Covid-19
(Image by wuestenigel)   Details   DMCA

The vaccine rollout process has been painfully slow in the United States. More than 40 days after the first vaccine was approved for emergency use by the Food and Drug Administration, just over 6.0 percent of our population has been vaccinated. And that is with just the first shot, very few having gotten the two shots needed to hit the targeted levels of immunity. Thankfully the pace of the vaccination program is picking up, both as kinks are worked out and now that we have an administration that cares about getting people vaccinated.

But we still have to ask why the process has been so slow. We have an obvious answer in the United States, the Trump administration basically said that distribution wasn't its problem. As Donald Trump once tweeted, he considered the distribution process the responsibility of the states and gave the order "get it done."

If we can explain the failure to have more rapid distribution in the United States on Trump's Keystone Cops crew, what explains the failures in other wealthy countries? As bad as the U.S. has done so far, we have vaccinated a larger share of our population than any country in Europe with the exception of the United Kingdom. That's right, countries like Denmark, France, and even Germany have done worse in vaccinating their populations than the United States. And these countries ostensibly have competent leaders and all have national health care systems. Nonetheless, they have done worse -- far worse in the case of France and Germany, than Donald Trump's clown show.

The Vaccine Agenda if Saving Lives Was the Priority

The pandemic is a worldwide crisis, that requires a worldwide solution. This is a classic case where there are enormous benefits from collective action and few downsides. This is not a case, like seizing oil or other natural resources, where if the United States gets more, everyone else gets less and vice-versa. Sharing knowledge about vaccines, treatments, and best practices for prevention is costless and the whole world benefits if the pandemic can be contained as quickly as possible. This point is being driven home as new strains develop through mutation, which may spread more quickly and possibly be more deadly and vaccine-resistant.

The logical path would have been to open-source all research on treatments and vaccines, both so that progress could be made as quickly as possible, and also intellectual property rights would not be an obstacle to large-scale production throughout the world. This would have required some collective agreement where countries agreed to both put up some amount of research funding, presumably based on size and per capita income, and also that all findings, including results from clinical trials, would be quickly posted on the web. This way, the information would be quickly shared so that researchers and public health experts everywhere could benefit.

This sort of international cooperation was obviously not on Donald Trump's agenda. Mr. "America First!" was not interested in the possibility that we might better be able to tame the pandemic if we acted in cooperation with other countries. But it wasn't just Donald Trump who rejected the idea of open research and international cooperation, it really wasn't on the agenda of any prominent politician, including progressives like Bernie Sanders and Elizabeth Warren. It was an issue in the scientific community, but as we know, people in policy circles don't take science seriously. (I describe a mechanism for advanced funding of open-source research in chapter 5 of Rigged [it's free].)

The big problem, of course, is that going this route of open-source research and international cooperation could call into question the merits of patent monopoly financing of prescription drug research. After all, if publicly funded open-source research proved to be the best mechanism for financing the development of drugs and vaccines in a pandemic, maybe this would be the case more generally. And, no one in a position of power in American politics wanted to take this risk of a bad example.

Making the Best of the Single Country Route

If we had gone the route of publicly funded open-source research, then the scientific community would have access to all the clinical trial results of all the vaccines as they become available. This would mean that countries could decide which vaccines they wanted to use based on the data. [1] They could also begin to produce and stockpile large quantities of vaccines, as soon as they entered Phase 3 trials. Incredibly, it seems no country has done this.

While we could not know that a vaccine entering Phase 3 trials will subsequently be shown to be safe and effective, the advantages of having a large stockpile available that can be quickly distributed swamp the potential costs of buying large quantities of a vaccine that is not approved. Suppose the United States had produced 400 million doses of a vaccine that turned out not to be effective. With the production costs of a vaccine at around $2 per shot, this would mean that we had wasted $800 million. With the country seeing more than 4,000 deaths a day at the peak of the pandemic and the economic losses from the pandemic running into the trillions, the risk of spending $800 million on an ineffective vaccine seems rather trivial.

For whatever reason, no country went this stockpile route. Just to be clear, there was no physical obstacle to producing billions of vaccines by the end of 2020. If we can build one factory to produce these vaccines, we can build 10 factories. If some of the inputs are in short supply, we can build more factories to produce the inputs. There may be questions of patent rights, but that is different than a question of physical limitations.

Dr. Dean Baker is a macroeconomist and Co-Director of the Center for Economic and Policy Research in Washington, D.C. He previously worked as a senior economist at the Economic Policy Institute and an assistant professor at Bucknell University. (more...)
Related Topic(s): China; Coronavirus Pandemic; Death; Elitism; Failure To Act; Health; International; Russia; Trump; Vaccines, Add Tags
Add to My Group(s)
Go To Commenting
The views expressed herein are the sole responsibility of the author and do not necessarily reflect those of this website or its editors.