NOTE: Although I've posted this article under stressful circumstances  (see postscript below) the perspective presented is definitely appropriate and shared by many people in this country. I may not be writing for a week or two, so I hope that this article is passionate enough to suffice for a while. 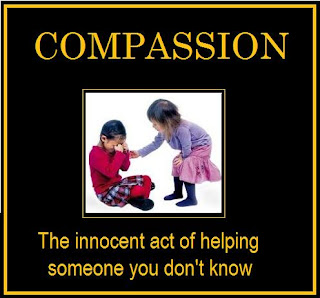 "But a certain Samaritan, as he traveled, came where he was. When he saw him, he was moved with compassion, came to him, and bound up his wounds, pouring on oil and wine. He set him on his own animal, and brought him to an inn, and took care of him. On the next day, when he departed, he took out two denarii, and gave them to the host, and said to him, 'Take care of him. Whatever you spend beyond that, I will repay you when I return.'"

On Tax Day, April 15th, Rep. Paul Ryan had this to say about "his" budget:

Our budget offers a compassionate and optimistic contrast to a future of health-care rationing and unbearably high taxes. We lift the crushing burden of debt, repair the safety net, make America's tax system fair and competitive, and ensure that our health and retirement programs have a strong and lasting future.[1]

There are people who would beg to differ with Ryan's statement, notably the people fighting his expansive social welfare cuts on Capitol Hill and in the White House. The fight has extended to the matter of the national debt and the next several weeks will be grueling ... and revealing. If you look at the fight in a simplified perspective, it becomes a battle for the existence of compassion: should it be sustained now (in a diminished form), or in the future? Republicans are already naming their form of "compassion" by calling it INTERGENERATIONAL JUSTICE.

But whatever the outcome of the fight, we must not lose sight of the fact that the economic and financial  crises we now face are about people: some people will benefit, while others will not. Cost cuts to social welfare agencies are already showing results: the poor are not only getting catastrophically poorer because they have less money but also because they have less access to housing and necessary subsidies. It is the same with healthcare reform: while decrying imagined atrocities of "Obamacare," not one conservative member of Congress has put forth any real solution for the uninsured. Republican actions in the House have, in fact, ensured us that none will ever be forthcoming.

The conservative image has never taken such a beating as in this Congress.

In the past, the conservative rich have always trotted out the defensive statistic that conservatives actually give more/do more for the disenfranchised than liberals because the liberals want the government to do their giving for them. They chafed when George Bush's "compassionate conservatism" was met with the label of "oxymoron." What liberals have always realized, however, is that most conservatives tend to give only to their own causes and many times those causes not only leave out whole groups of Americans, but actually sustain the gap between the haves and the have-nots. Conservatives must control where their money goes. Liberals do it too, but conservatives do it more often and on a larger scale.

Giving to those in need comes down to true compassion. But what is "true compassion" Who is more compassionate - a church elder making a cake for a church bazaar held for the homeless or the man who off-handedly gives a man on the street a dollar because he asked for it? Both are compassionate, but the church elder KNOWS to whom she is giving her time, money, and effort, while the anonymous man cares not who the needy person is (or even if the person is, indeed, needy at all). Conservatives would not call the latter's gesture compassion, but the mere foolhardiness of a "bleeding heart liberal."

In biblical terms, one could associate the Good Samaritan with true compassion: when the priest and the Levite saw the man they both passed by. Why? Perhaps because when they saw him they judged him immediately as not worth their efforts. Now, notice that Christ's story did not say that the Samaritan knew he was helping a Jew.[2] In other words, the Samaritan did not judge, nor did he know whom he was helping. The Samaritan just did what he felt was the right thing- the human thing -to do.

In another belief system (not really a religion), there's the story of  bodhisattva  Quan Yin (correction: stories - hundreds of legends, but all of their central themes involve her compassion). The most popular is the one that after she was made an Immortal, Quan Yin started her ascent to Enlightenment (heaven), but heard the cries of people still in need, forsook heaven and descended to help them. There are many parallels given to Quan Yin's Christian counterpart, Mary, the mother of Jesus. (Aside: it is interesting to note that much of the non-denominational and Protestant denominational Christian Right consider prayers to St. Mary to constitute "Mariolatry" or idolization of the Virgin Mary. They are loathe to think of any intercessor to Christ for mercy.)

Rev. Dan Vojir is has been writing/blogging on religion and politics for the better part of ten years. A former radio talk show host (Strictly Books " Talk America Radio Network) and book publisher, Dan has connected with some of the most (more...)
Related Topic(s): Bryan Fischer; Christian Right; Compassion; Compassionate Conservatism; Debt Ceiling; Genocide; Good Samaritan; Hypocrisy; Intergenerational Justice; LGBTI Discrimination; (more...) Liberalism; Ryan-Paul; Southern Baptist Convention, Add Tags  (less...)
Add to My Group(s)
Go To Commenting
The views expressed herein are the sole responsibility of the author and do not necessarily reflect those of this website or its editors.