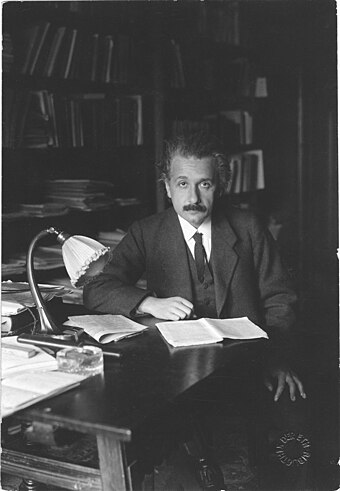 Electrons and quarks, galaxies and black holes, electromagnetic radiation, DNA and cells, gravity, molecular bonds, the speed of light, the power in the nucleus -- these contain a gospel more profound than any written by humans.

Did you know that Albert Einstein, although Jewish, went through a brief childhood phase of devout Christianity?

In an autobiographical sketch written at age 67, he described his short-lived faith, planted in him by daily indoctrination at a Catholic school to which his parents had sent him:

"Thus I came -- despite the fact that I was the son of entirely irreligious (Jewish) parents -- to a deep religiosity, which, however, found an abrupt ending at the age of 12. Through the reading of popular scientific books, I soon reached the conviction that much in the stories of the Bible could not be true.

"The consequence was a positively fanatic freethinking, coupled with the impression that youth is intentionally being deceived by the state through lies. It was a crushing impression.

"Suspicion against every kind of authority grew out of this experience, a skeptical attitude toward the convictions which were alive in any specific social environment -- an attitude which has never left me, even though later on, because of a better insight into the causal connections, it lost some of its original poignancy.

"It is quite clear to me that the religious paradise of youth, which was thus lost, was a first attempt to free myself from the chains of the 'merely personal,' from an existence which is dominated by wishes, hopes and primitive feelings. Out yonder there was this huge world, which exists independently of us human beings and which stands before us like a great, eternal riddle, at least partially accessible to our inspection and thinking. The contemplation of this world beckoned like a liberation....

"The road to this paradise was not as comfortable and alluring as the road to the religious paradise, but it has proved itself as trustworthy, and I have never regretted having chosen it."

"What this passage reveals is a conversion from personal religion to the 'cosmic religion' of science, an experience which changed him for the rest of his life. Einstein saw that the universe is governed by laws that can be known by us but that are independent of our thoughts and feelings.

"The existence of this cosmic code -- the laws of material reality as confirmed by experience -- is the bedrock faith that moves the natural scientist. The scientist sees in that code the eternal structure of reality, not as imposed by man or tradition but as written into the very substance of the universe. This recognition of the nature of the universe can come as a profound and moving experience to the young mind."

Looking into the soul of the universe isn't just for world-class physicists. It can happen to anyone who ponders the awesome discoveries of science, from quarks to quasars.

Related Topic(s): Atoms; Energy; Laws; Matter; Nature; Radiation; Universe, Add Tags
Add to My Group(s)
Go To Commenting
The views expressed herein are the sole responsibility of the author and do not necessarily reflect those of this website or its editors.