Dallas Goldtooth, a veteran organizer of the Keystone XL fight, is amazed at the historic support from tribes at Standing Rock--even tribes that rely on resource extraction. 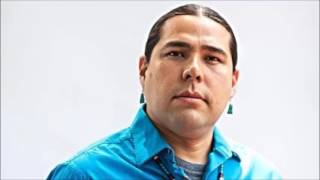 This year's massive buildup of resistance to the Dakota Access pipeline follows closely on the heels of the victory over Keystone XL pipeline, something often credited to feverish organizing by 350.org. But years before 350's involvement, there was the Indigenous Environmental Network, which launched that movement and its "Keep It In the Ground" messaging. This time, with nearly 200 tribes unified behind the Standing Rock tribe's opposition to the pipeline and more than 3,000 people gathered at the Standing Rock Sioux reservation, Native Americans are clearly leading the movement.

The encampments at Standing Rock are filled with prayers and ceremonies, and the spiritual core to this movement gives it resilience and power. The courage and clarity of the stand to protect our water is attracting support across the nation and around the world.

I came to Standing Rock to cover the arrival of Northwest tribal canoes and stayed for the rulings Friday on whether construction of the pipeline can continue. I spoke to Dallas Goldtooth, a veteran of the Keystone XL movement, on a hill overlooking the camp. Goldtooth (Mdewakanton Dakota and Dińe) is the Keep It In The Ground campaign organizer for the Indigenous Environmental Network.

Dallas Goldtooth: We can only focus on this cherished moment that we have with each other. And the organizing continues. One thing that the uncertainty provides is this constant drive to see what else can we do to change the social dial toward our direction and change the conversation. I think slowly it's happening, it's coming. Standing Rock has now entered into the national narrative in some ways, in some places, so how can we further that?

van Gelder: I just asked a woman from the Oglala Nation if she'd ever seen anything like this. She said not since 1973 at Wounded Knee. Tell me how you see this in a historic context.

Goldtooth: I've talked to folks who were there, who are in this camp. At its very most there were about 200 people at Wounded Knee at its peak, and a lot of those were people who came in for the weekend and left. At its peak in this camp, we reached up to 3,500 people. People that traveled across the country. They carpooled, hitchhiked. They organized caravans and buses. It's magnificent to see that. It makes me think how different it would have been if we had had Facebook in 1973.

This is a special moment in the climate justice movement. We've had significant wins: Keystone XL. The Cherry Point coal terminal, another win in support of treaty rights. I'm looking forward to what happens next. There are people very committed --through nonviolent direct action, through legal strategies, through social movement strategies -- to make sure we see a win in this case, too.

van Gelder: This is a pretty big moment for treaty rights and for indigenous folks standing together.

Goldtooth: It is. I don't think there has ever been as large a mobilization and a unified, unilateral Indian Country support like this. We've had chairmen, traditional chiefs, chairwomen, the leaders of the leaders of Indian Country, who have come to this camp. Also, we've had a lot of non-Native allies that are 100 percent supportive of the fight and struggle here because they see the connections. This fight right now, it's about the water. And because the messaging is that water is life, so many people can connect with that. Whether you're native or non-Native, whether you're from Chicago or Detroit or New Orleans or up in the Bakken, we all understand the importance of protecting the water. That brings us together.

Indigenous Environmental Network, our organization, has been fighting Dakota Access for about two years, when they first applied for the state permits. In South Dakota, we were intervening in the Keystone XL stuff, and we saw Dakota Access come up. So we intervened on behalf of Standing Rock at the time. And even back then we had the Tribal Historic Preservation Office testify saying the court is not consulting with us: "We have not been consulted. There are sacred sites out there that they missed." And that was two years ago. And look where we're at now.

Yes magazine is a superb publication with visionary articles Opednews recommends very highly. They give OEN permission to periodically reprint some of their articles.
Related Topic(s): Dakota; Pipeline; Race Native American- First Nation; Standing Rock; Water, Add Tags
Add to My Group(s)
Go To Commenting
The views expressed herein are the sole responsibility of the author and do not necessarily reflect those of this website or its editors.