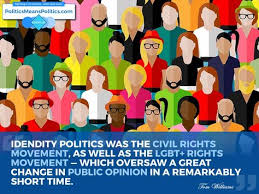 Whatever the world believes and does, choose to believe and do the opposite. That's because the Truth that some call "God" is found 180 degrees opposite to what the world claims as true. That's the message of today's liturgy of the word.

So, take heart if as a follower of the Christ, they accuse you of advocating identity politics, deride you as a social justice warrior, woke, politically correct, a conspiracy theorist, or a whatabouter. Leaving aside their distorted meanings, all of those categories should actually be embraced by critical persons of faith who take this Sunday's readings to heart.

In today's key selection, Paul refers to accusations like the above as "flesh," because they insistently judge according to external appearances and directly contradict the teachings of Moses and Jesus. Such judgments routinely gas light activists demonstrating for social justice across the world. For instance, followers of Rush Limbaugh tell awakened Black Lives Matter demonstrators to go back to sleep. They admonish "conspiracy theorists" to simply accept White House narratives. They ridicule "social justice warriors" as pathetic Don Quixotes impotently jousting at windmills. And they say progressives, "snowflakes" should be embarrassed about their annoying "political correctness" and whataboutism.

However, today's reading from the prophet Zechariah calls for political strategy that penetrates below such superficiality at every turn. In the process, he longs for political leaders whose laser vision will reject the outer manifestations that tell us that things are fine the way they are. For instance, his ideal ruler will refuse military display and instead sponsor programs of national disarmament. That, of course, flies in the face of "American" cultural ideals of bluster, toughness, and aggression.

Finally, in our Gospel reading, Jesus promises that adopting contrary unfleshly values will result in easy, restful and unburdened existence for everyone.

Before we get to those separate readings, begin by contrasting the wisdom of the world's flesh merchants with the general vision recommended (as we'll see below) in today's selections. Think about the dominant culture's superficial dismissal of social justice warriors, the "woke," of everything that smacks of political correctness, or conspiracy theories or whataboutism. Those caught up in fleshly appearances want progressives to feel guilty about the critical thinking implied in each of those categories understood in the light of faith.

With all of this in mind, here are my "translations" of the readings that inspire today's reflection. Please read them for yourselves here to see if I've got them right. I take them all as issuing a call to depart entirely from the dominant culture's way of thinking and acting in the areas just designated.

Zechariah 9: 9-10: The world leader we're all waiting for won't come driving a Sherman Tank, Cadillac or a Rolls Royce. Rather, she'll arrive on a bicycle. Moreover, she'll achieve peace by eliminating the entire military-industrial complex. No more war for this non-violent champion!

Psalm 145: 1-2, 8-14: When she comes, we'll all join in grateful thanksgiving to our Great Cosmic Mother. We'll praise her for her grace, patience, goodness, kindness and compassion. We'll finally realize that might is found precisely in what the world considers weakness - in the fallen and heavily burdened.

Romans 8: 9-13: On that happy day, everyone on earth will understand their spiritual unity with everyone else regardless of externals - "flesh" including its color. We'll see that at core, all of us share the loving Spirit that animated Jesus the compassionate Christ. Fullness of life, he taught, lies in a direction 180 degrees away from the fleshy exterior reality to which the world so insistently limits our attention.

Matthew 11: 25-30: Yes, the worldly wise and learned tell us that "reality" is defined by what we can see and feel and that might makes right. However, the unpretentious nobodies of the world who follow Jesus know much more. In their humility, disarmed non-violence, and refusal to compete, they share the very mind of God. They've discovered the secret of an easy, restful and unburdened existence.

Related Topic(s): Biblical Theology; Christianity; Conspiracies; Conspiracy; Faith; God; Identity Politics; Jesus; Judeo-christian; Moses; (more...) Sunday; Truth, Add Tags  (less...)
Add to My Group(s)
Go To Commenting
The views expressed herein are the sole responsibility of the author and do not necessarily reflect those of this website or its editors.