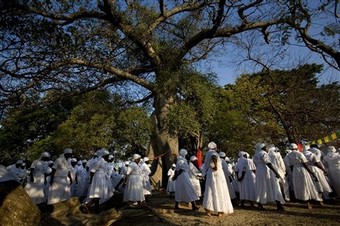 ******************************************
"Once upon a time, trees were sacred things in Haitian/African culture, looked upon as living energies that provided strength to the people. Thus, cutting down trees was relatively a taboo. But these core Africanist values were scorned and desecrated by the influences of Western colonialism and Christian missionaries on traditional Vodun. These core values were uprooted during the anti-Vodun Rejete campaigns (1940-41) as a means for the Catholic Church to get rid of Vodun as its rival religion and philosophy in Haiti and as a way for the US to clear peasant Haitians off lands they wanted to acquire for their agricultural initiatives in Haiti in the 1940s during the post-U.S.-occupation presidency of Elie Lescot (1941-46).

The Catholic Churches' brutal anti-superstition campaigns in the 1940s, which made it alright to destroy trees that holds up not only the land but a culture, adds to deforestation in Haiti. For, once these core values were broken down and substituted with foreign ideals (senility?) - foreign psychology irrelevant to Haitian survival, things in Haiti for the vast majority, as Chinua Achebe, would put it: began to "fall apart..." (Ezili's HLLN on the Counter-Colonial Narrative on Deforestation, See also - HLLN on the causes of Haiti deforestation and poverty.)

In order for consumerism, corporate greed and imperialism to work there must be a narrative. A narrative that claims to be about the common good, about science, development, advancement, education.

In that way, although it is just a regular sci-fi movie with the same ol' plots and the same white hero narrative, I take the time here to analyze the Avatar movie because if James Cameron was looking to tell a story from the point of view of people of color, he fell short. The racist subtext effaced that desire.

I went and saw the Avatar movie looking to find a redeeming deeper meaning in it as so many on this Ezili/HLLN list had such divergent opinions.

First, let me say, what I am about to write is not an attack on anyone. It's what I think, from my point of references, after seeing the movie.

Those of us who are concerned with human rights, environmental degradation, corporate greed will find that the Avatar movie is a parable and metaphor for how Western culture, corporate greed, consumerism, white privilege and imperialism is destroying the earth through wars for oil, occupations for taking "the other world's" resources and minerals, through mining, clear-cutting, taking down the environment without regards to the human being and the ecology that's destroyed. So, if you are a moviegoer, this is not a bad choice and I recommend the movie for that. I also recommend the movie as a study of the white savior complex. It's very instructional in that way.

I've done Haiti work all my life and have run into the "assimilated" white savior who feels so assimilated and "Haitian" he can insist on his cultural empathy as credential for LEADING the indigenous Haitian to liberty!

Ezili's HLLN has always maintained that the best function of friends of Haiti is not to strum dependency but load our gun and also to go to Washington and push their own to change their policies towards Haiti. No one can give another his/her liberty. We Haitians, we Blacks, we Africans must take what's ours, own our own liberty, as all human beings must. Otherwise it's charity, degrading and meaningless.

The movie is also worthy as a study because one can see the analogy to Haiti, Iraq, Afghanistan and every other place where the US/Euros have gone to invade, conquer and plunder in the name, of course, of bringing democracy or humanitarian aid or bringing civilization and God!

In an interview, James Cameron reportedly said he was writing from the indigenous point of view. If I took him seriously, and let him look through my eyes, this is what he would see:

A real life example of what happened to the fictional Na'vi people in the movie is happening to Haiti right now. The US military took down president Aristide, deported him to Central Africa, and took over Haiti with hired thugs and death squads, then used the UN and the NGO squads to deflect charges of terror, racism and imperialism. Meanwhile the UN is protecting not Haitian rights and sovereignty but the right of the NGOs, corporate greed, sweatshops, trans-national corporations' right to privatization of Haiti's assets - bling (gold, iridium, copper, oil, diamonds, marble)- and the mining and oil companies to do as they please in Haiti. How greed and imperialism destroys the environment...The Avatar movie is a good analogy, a good parallel for this. In it, we see the mad preppy corporate guy, head of the mining operation who employs a small army of former marines for security and directs them to attack the Na'vi people because his company wants the blang -a mineral called unobtainium - that's underneath the soil in Pandora where the Na'vi people live.

In the Avatar movie, the fictional cultural expert played by Sigourney Weaver is the expert who is wiring the humans' brains into the bodies of Na'vi avatars to try to win the indigenous people's trust; building schools in the Na'vi people's world and trying to "educate them," all, on behalf of the mad preppy corporate guy so to befriend them, manipulate them and convince them that the more civilized thing to do is to leave their ancestral lands where the life-force of their mother Goddess and Tree of Souls (ancestors) live and go elsewhere. Manipulating for corporations' profit. If the anthropologist team doesn't succeed with their psychological brainwashing then the mad preppy will just get his military forces to crush the Navi's with tanks and bombs. Sounds familiar?