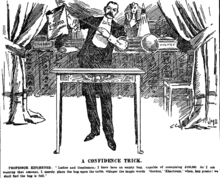 This is not an election.

This is a con game, a scam, a grift, a hustle, a bunko, a swindle, a flimflam, a gaffle, and a bamboozle.

In this carefully choreographed scheme to strip the American citizenry of our power and our rights, "we the people" are nothing more than marks, suckers, stooges, mugs, rubes, or gulls.

We are victims of the Deep State's confidence game.

In this particular con game, every candidate dangled before us as some form of political saviorincluding Donald Trump and Joe Bidenis part of a long-running, elaborate scam intended to persuade us that, despite all appearances to the contrary, we live in a constitutional republic.

In this way, the voters are the dupes, the candidates are the shills, and as usual, it's the Deep State rigging the outcome.

Terrorist attacks, pandemics, civil unrest: these are all manipulated crises that add to the sense of urgency and help us feel invested in the outcome of the various elections, but it doesn't change much in the long term.

No matter who wins this election, we'll all still be prisoners of the Deep State.

We just haven't learned to recognize our prison walls as such

It's like that old British television series The Prisoner, which takes place in a mysterious, self-contained, cosmopolitan, seemingly idyllic retirement community known only as The Village.

Perhaps the best visual debate ever on individuality and freedom, The Prisoner (17 episodes in all) centers around a British secret agent who abruptly resigns only to find himself imprisoned, monitored by militarized drones, and interrogated in The Village, a beautiful resort with parks and green fields, recreational activities and even a butler.

While luxurious, the Village is a virtual prison disguised as a seaside paradise: its inhabitants have no true freedom, they cannot leave the Village, they are under constant surveillance, all of their movements tracked. Residents of the Village are stripped of their individuality and identified only by numbers

First broadcast in Great Britain 50-some years ago, The Prisoner dystopian television series described as "James Bond meets George Orwell filtered through Franz Kafka" confronted societal themes that are still relevant today: the rise of a police state, the loss of freedom, round-the-clock surveillance, the corruption of government, totalitarianism, weaponization, group think, mass marketing, and the tendency of human beings to meekly accept their lot in life as prisoners in a prison of their own making.

The series' protagonist, played by Patrick McGoohan is Number Six.

Throughout the series, Number Six is subjected to interrogation tactics, torture, hallucinogenic drugs, identity theft, mind control, dream manipulation, and various forms of social indoctrination and physical coercion in order to "persuade" him to comply, give up, give in and subjugate himself to the will of the powers-that-be.

Related Topic(s): 2020 Elections; Election; Freedom; Government; Surveillance; Totalitarianism, Add Tags
Add to My Group(s)
Go To Commenting
The views expressed herein are the sole responsibility of the author and do not necessarily reflect those of this website or its editors.