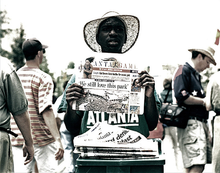 And the walls came down

All the way to hell

Never saw them when they're standing

Never saw them when they fell

- The Travelling Wilburys, "Tweeter and the Monkey Man"

As if America didn't have enough problems, a foot soldier in the Army of God was afoot in the wee hours of July 27, 1996 at Centennial Park in Atlanta, where the Olympics were winding up for the night. Eric Rudolph, formerly of the Army of Exceptionalism -- he'd been a special ops soldier in the Airborne 101 -- was strolling near some benches behind the park, wearing a green backpack. There were dozens of people milling about. Rudolph sat on a bench and surreptitiously opened his backpack and set a timer on a huge bomb and placed the pack under the bench, then walked away hurriedly. No one saw him.

Rudolph rushed to a phone bank outside a Days Inn a couple of blocks away from the park and called in the bomb threat to 911. He used a plastic device to disguise his voice, and then, according to Kevin Salwen and Kent Alexander's, co-authors of The Suspect, on which the film is partially based, the following telephone exchanges took place: Rudolph said, "'We defy the order of the militia "' Click. The line went dead. The 911 operator had disconnected him. "Disconcerted at not being taken seriously, Rudolph called back, disguising his voice by pinching his nose, and said: "'There is a bomb in Centennial Park. You have thirty minutes.' He hung up. The call lasted thirteen seconds." Confusion followed, with the 911 operator unable to find the Olympic Park address. Transcripts show insufficient urgency followed:

Related Topic(s): Bombing; Death; Editors; God; Hero; Investigation; Journalism; Media; Olympic Games; Park; (more...) Profiling; Reporter; Security; StoryTelling, Add Tags  (less...)
Add to My Group(s)
Go To Commenting
The views expressed herein are the sole responsibility of the author and do not necessarily reflect those of this website or its editors.