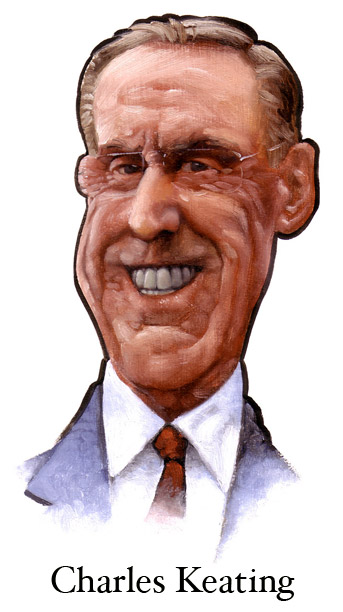 On April 2, 2014, as news broke of the death of Charles Keating, the most infamous savings and loan fraud, I posted an article entitled "Ten Lessons We Must Learn from Charles Keating."   (The April 2 date was ironic, because it was the 27th anniversary of the meeting at which the senators who would become known as the "Keating Five" began to seek to intimidate the savings and loan regulators on Keating's behalf.)

I failed to explain perhaps the most important lesson we should have learned from Keating and Lincoln Savings.  One of the subtle aspects of the savings and loan debacle that is often overlooked is that we ran a real world test of the importance of the provisions of the 1933 Banking Act known as the Glass-Steagall Act.  Glass-Steagall prohibited "commercial" banks that received federal deposit insurance (created by the same 1933 banking act) from owning equity positions in nearly all financial assets ("investment banking").  With very limited exceptions, a commercial bank could not own real estate, companies, or stock in companies.  (Banking regulators, hostile to Glass-Steagall despite its immense success, would later add many exceptions.)  The ideas behind Glass-Steagall's separation of "banking" from "commerce" always made eminent sense from conservative and progressive perspectives.  Commercial banks received a federal subsidy through deposit insurance, so it made no sense for them to be allowed to compete against regular businesses that lacked that subsidy.  It would distort markets to allow such a subsidy.

It was also dangerous to allow commercial banks to make much riskier investments.  Losses are much lower on prudently underwritten loans than equity investments.

Glass-Steagall represented another lesson learned from the Great Depression -- conflicts of interest matter.  There were obvious potential conflicts of interest in combining commercial and investment banking.  If a bank investment in a company was going bad, the temptation would be to loan the company large amounts of money to try to delay or prevent its failure.  Similarly, if a loan customer was experiencing a liquidity problem and could not repay its loan the temptation could be for the bank to buy newly issued stock in the company.

S&Ls, however, could operate under radically different rules during the 1980s.  State chartered S&Ls had the investment powers permitted by the states, while remaining eligible for federal deposit insurance.  Texas led the Nation in a type of investment, the acquisition, development, and construction (ADC) loan.  While ADC loans were nominally structured as loans, it was the norm in Texas that they were in economic substance (and for accounting purposes) properly classified as "investments" rather than "loans."  I will not explain the details of ADC loans in this column.  I will note briefly only several implications of ADC lending.  First, ADC loans (that were actually "investments") were the single greatest cause of losses in the S&L debacle.  Second, Keating's unholy jihad against our reregulation of the industry was concentrated on our effort to regulate "direct investments" that included direct ownership positions and most ADC loans.  Third, the accounting for ADC loans was a classic example of a "Gresham's" dynamic in which "bad ethics drives good ethics out of the profession."  The accounting profession tried repeatedly (the EITF issued three notices to practitioners) to end the rampant false classification of ADC loans as true "loans" rather than "investments."  Each of these efforts failed because the fraudulent S&L and bank CEOs were almost invariably able to find an audit partner at a top tier audit firm to bless ADC deals as a "loans" even when they were obviously investments.  Fourth, when classified, improperly, as loans the worst ADC "loans" were the nearly perfect "ammunition" for accounting control fraud.  If they were classified properly as "investments" they would have been a far poorer fraud scheme.  Fifth, banks, particularly in Texas, made enormous amounts of ADC loans that were improperly classified as "loans."  This allowed them to evade Glass-Steagall.

Dick Pratt, the Chairman of the Federal Home Loan Bank Board, was a theoclassical economist so he had the agency's econometricians' study which state's S&Ls reported the highest profits so he could use that state's asset powers as the model for federal deregulation.  He led the drafting of the Garn-St Germain Act of 1982, which used Texas as its model for federal deregulation.  Texas led the nation in deregulating ADC loans.  Pratt, like all good theoclassical economists, ignored fraud (except when he was leading it -- see the chapter in my book on "goodwill" accounting).  He failed to understand that Texas S&Ls reported the highest earnings because ADC loans were such ideal fraud ammunition.

Pratt also failed to understand the implications of the regulatory "race to the bottom" that he would trigger through federal deregulation.  California responded to Garn-St Germain with the Nolan Act (Nolan, fittingly, would later be convicted of corruption).  The Nolan Act allowed a California chartered S&L to place 100% of its assets in direct investments.  Hundreds of real estate developers, including Charles Keating (who infamously called the Nolan Act "a license to steal"), rushed to get a California S&L charter through merger (Keating's purchase was funded entirely by Michael Milken's Drexel Burnham Lambert) or the grant of a new (de novo) charter.

These are the four key lessons about Glass-Steagall that we should have learned from Lincoln Savings and its 33-fellow S&Ls that became both lenders and investment bankers.  The proponents of repealing Glass-Steagall went 0 for 34 when we ran the real world experiment with their ideas during the S&L debacle.  Unfortunately, Glass-Steagall was doomed by the combination of politicians eager for campaign contributions from big finance and theoclassical economists who inhabit a fantasy-based world of dogma that ignored the results of the real life experiment with unlimited direct investments that Keating's economic troika of Greenspan, Benston, and Daniel Fischel (then, U. Chicago -- Law) claimed would prove that Glass-Steagall was a harmful relic of a primitive age when we foolishly believed in regulation.  The politicians and the economists ignored the conclusive results of the experiment and embraced dogma (and contributions).

The legislative response to the Great Depression involved radical reforms that came from strong presidential and congressional leadership addressing the causes of the Great Depression and a sophisticated understanding of the implications of deposit insurance for why commercial and investment banking should be separated.  The Dodd-Frank Act, by contrast, exemplified the timid and unfocused response that occurs when there is weak presidential leadership, politicians who are still heavily influence by the desire for political contributions, and the lack of intellectual rigor sufficient to escape the dead hand of neoclassical dogmas that had (once again) been falsified by reality.  The first sentence of the Dodd-Frank Act (which would have shortened it by over 300 pages) should have been: "'The Commodities Futures Modernization Act of 2000' and 'The Financial Services Modernization Act of 1999' are repealed."  The CFMA was designed to destroy Brooksley Born's efforts to as CFTC chair to protect us from financial derivatives.  It created the infamous regulatory "black hole" that AIG's senior derivatives officers exploited to loot AIG.  The FSMA (Gramm-Leach-Bliley) destroyed Glass-Steagall's protections.  Notice that the active word in both Acts is "modernization."  They were both sold under the twin lies that financial regulation was archaic and unnecessary and that it was vital that we "win" the regulatory "race to the bottom" with European banks and bank (non) regulators.  Everyone that participates in such a race loses.

William K Black , J.D., Ph.D. is Associate Professor of Law and Economics at the University of Missouri-Kansas City. Bill Black has testified before the Senate Agricultural Committee on the regulation of financial derivatives and House (more...)
Related Topic(s): Bankers; Banking; Banks; Economists; Finance; Financial; Fraud; Fraud; Glass-Steagall; Losses; (more...) Savings; Subsidy, Add Tags  (less...)
Add to My Group(s)
Go To Commenting
The views expressed herein are the sole responsibility of the author and do not necessarily reflect those of this website or its editors.