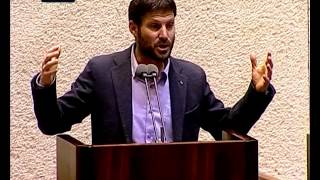 Bezalel Smotrich
(Image by YouTube, Channel: ' ')   Details   DMCA
I OWE many thanks to Bezalel Smotrich. Yes, yes, to Smotrich of the extreme right, Smotrich the fascist.

Recently Smotrich gave a speech to his followers, which he intended to be a national event, the turning of a page in Jewish history. He was gracious enough to mention me in this monumental message.

He said that after the 1948 war, in which the State of Israel was founded, Uri Avnery and a small band of followers created the ideology of "two states for two peoples," and by patient work over many years succeeded in turning this idea into a national consensus, indeed into an axiom. Smotrich told his devotees that they, too, had to formulate their ideology, work patiently for many years until it became the national consensus instead of Avnery's.

A compliment from an enemy is always sweeter than one from a friend. The more so as I never received many compliments from friends. Indeed, the many politicians who profess now to fight for "two states for two peoples" try to obliterate the fact that I was the first to proclaim this idea, long before they themselves were converted to it.

So thank you, Smotrich. Coupled with my thanks, may I express the wish that you adopt a Hebrew name, as befits a man who aspires to become the Hebrew Duce?

AFTER THE compliment, Smotrich set out his plan for the future of Israel.

It is based on the demand that Arabs living between the Jordan River and the Mediterranean Sea choose between three alternatives:

First, they can accept a monetary payment and leave the country.

Second, they can become subjects of the Jewish State without becoming citizens and without attaining the right to vote.

Third, they can make war and be defeated.

THIS IS Fascism, pure and simple. Except that Benito Mussolini, who invented the term (from fasces fasces, a bundle of rods, the old Roman symbol of authority) did not preach mass emigration of anyone. Not even of the Italian Jews, many of whom were ardent Fascists.

Let's look into the plan itself. Can an entire people be induced peacefully to leave their motherland for money? I don't think that it has ever happened. Indeed, the very idea shows an abysmal contempt for the Palestinians.

Individuals can leave their homes in times of stress and emigrate to greener pastures. During the great famine, masses of Irishmen and Irishwomen emigrated from their emerald isle to America. In today's Israel, quite a number of Israelis are emigrating to Berlin or Los Angeles.

But can millions do so? Voluntarily? For gain? Quite apart from the fact that the price would invariably rise from emigrant to emigrant. There would not be enough money in the world.

Related Topic(s): Arab; Bezalel Smotrich; Fascist; Israel; Mussolini; Naqba, Add Tags
Add to My Group(s)
Go To Commenting
The views expressed herein are the sole responsibility of the author and do not necessarily reflect those of this website or its editors.