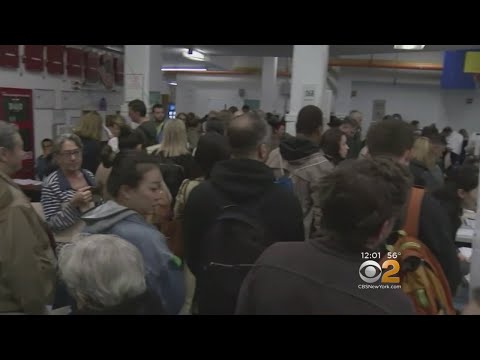 Washington, D.C.'s primary election on June 2 experienced many obstacles: Police officers told voters waiting in line that they were violating a curfew; the protests against police violence continued throughout the city; and fears of the spread of COVID-19 remained. One less-well-known primary breakdown happened when the city's high-tech tools intended to help people vote failed, according to a preliminary report from the D.C. Board of Elections.

"The Vote4DC Mobile App proved incompatible with various types of mobile devices used by some voters. The application's vendor was unable to triage and correct the problems," the June 16 report's executive summary said. It added, "Many voters who timely completed their ballot requests could not track the status of their ballots. This led to understandable confusion and frustration."

Some of that confusion prompted voters to overwhelm 20 polling places. The report concluded that the city would have to do many things to prepare for the fall's election, from mailing every voter a ballot, to doubling the number of early voting centers, to modernizing its computers to process absentee ballots and support in-person voting, and more. Even though the election officials handled many unprecedented challenges, such as a quadrupling of absentee ballot requests and responding to a poll worker exodus in the pandemic, it wasn't good enough.

"Without the additional resources to cover the [fall's] expected record-shattering voter turnout, the long lines and voter frustrations cannot be adequately addressed," it said.

The new disclosures about what impeded primary voters amid protests and a pandemic, as well as recommendations by election officials to the mayor and city council, are not unique to Washington. As 2020's primaries continue with an unprecedented shift to mail-based voting east of the Rockies, revelations keep emerging about issues in intricacies of the voting process -- including new technology-based failures or unnecessary complexities.

In South Carolina's June 9 primary, the state's website allowed voters to download an absentee ballot application. But if that voter used an Apple computer without Adobe software, then the form would not open, said Duncan Buell, a Richland County election commissioner who also chairs the computer science department at the University of South Carolina in Columbia. (In addition to that complication, 12,000 of the 24,000 voters who applied online for a mail-in ballot in his county didn't properly finish the process, he said. They didn't print, sign and mail it.)

In Pennsylvania's June 2 primary, the state portal to apply to vote from home gave voters two options: apply for an absentee ballot or a mail-in ballot. The absentee ballot application form requires stating an illness and the name of the voter's doctor, while the mail-in ballot does not. The absentee form appears first (to the left), noted Phil Keisling, Oregon's former secretary of state and chair of the National Vote at Home Institute, who said this portal was confusing and discouraging to voters who didn't want to share personal information.

Georgia's Republican Secretary of State Brad Raffensperger wants the state election board, which he chairs, to take over administering elections in the blue epicenter county for fall's general election. He also announced the state would not be mailing voters mail-in ballot applications for the fall, drawing criticism from voting rights activists who said that would increase lines at the polls.

The picture that is emerging in states and counties that have little experience with a majority voting by mail is that the process is more complicated than anticipated for all involved: voters, their advocates, campaigns, administrators and vendors. The process, including key steps that are not widely seen by the public, keeps surfacing more tech-based complications -- problems that can be compounded by political decisions.

This trend can also be seen recently with the post-Election Day process of counting votes.

In Philadelphia, hand-marked absentee ballots that are poorly filled in -- or seen by election workers as not likely to be accurately scanned by the tabulators -- must be copied before scanning. "We object to the way that many, likely thousands, of ballots were duplicated," said Rich Garella of Protect Our Vote Philly, as Philadelphia and other Pennsylvania counties were still counting votes two weeks after the June 2 primary. "We object to watchers being deprived of the right to view ballots during the canvass."

Steven Rosenfeld  covers democracy issues for AlterNet. He is a longtime print and broadcast journalist and has reported for National Public Radio, Monitor Radio, Marketplace,  TomPaine.com  and many newspapers. (more...)
Related Topic(s): 2020; Computers; Glitches; Issues; Pandemic; Primaries; Technology; Voting, Add Tags
Add to My Group(s)
Go To Commenting
The views expressed herein are the sole responsibility of the author and do not necessarily reflect those of this website or its editors.