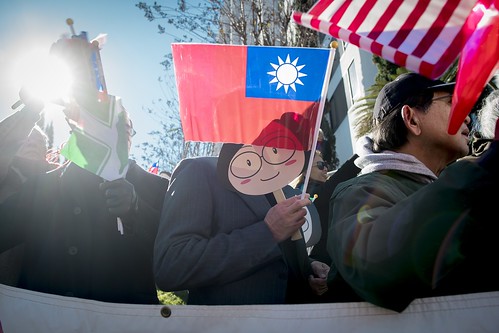 Taiwan has found itself increasingly in the middle of the growing power struggle between a waning US and a rising China.

Taiwan is recognized by both the UN and the vast majority of the world's nations including (officially) the United States under the One China policy - but Taiwan's pro-independence circles have nonetheless enjoyed large amounts of financial and political support from Washington and has been a point of contention in the region and between Beijing and Washington for decades.

The most recent example of this - reported by the Taipei Times in their article, "Two Washington-based pro-democracy NGOs to establish offices in Taipei," - was the increased footprint of Washington's notorious regime change front - the National Endowment for Democracy.

The article would claim:

Two Washington-based non-governmental organizations (NGOs), the National Democratic Institute for International Affairs (NDI) and the International Republican Institute (IRI), are to establish offices in Taiwan after they were sanctioned by Beijing last year.

The two institutes, along with the US National Endowment for Democracy (NED), Freedom House and Human Rights Watch were sanctioned last year after speaking in support of Hong Kong democracy activists and as well as being part of China's tit-for-tat reaction against US President Donald Trump signing the US' Hong Kong Human Rights and Democracy Act.

Making the purpose behind the US NED's expansion in Taiwan much clearer was IRI president Daniel Twining's comments claiming (emphasis added):

From our Taipei base, we will work with our partners to highlight Taiwan's hard-won democratic lessons, strengthen networks of Asia's democratic actors and build resilience against malign authoritarian influence in the region" As the CCP [Chinese Communist Party] becomes more aggressive in violating the global rules-based order, now is the time for all democracies " to invest in strengthening ties with Taiwan.

In other words, the US NED's move in Taiwan is meant to contribute to Washington's wider campaign of encircling and containing not only China but to fuel US-funded unrest targeting China's closest regional allies.

Independence movements in Taiwan have identified themselves as part of the so-called "Milk Tea Alliance" - a united front of US-funded opposition groups from across the region attempting to coerce their respective governments into a confrontational posture toward Beijing. Most recently this has included the opposition in Hong Kong and anti-government protests in Thailand.

And while the US is clearly banking on its heavy investments in "soft power" - essentially region-wide political interference - China's strategy focuses instead on economic ties underpinned by principles of non-interference.

It is no surprise that the Asian region has responded positively to the latter instead of the former.

Related Topic(s): Taiwan, Add Tags
Add to My Group(s)
Go To Commenting
The views expressed herein are the sole responsibility of the author and do not necessarily reflect those of this website or its editors.