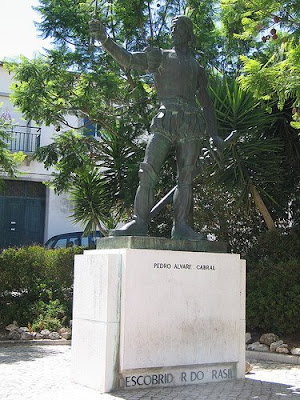 (Image by Unknown Owner)   Details   DMCA
This trip report covers the period of March 12-20 as I traveled to Florida and Portugal.

I must first acknowledge that, initially, my reasons for going to Florida were quite selfish. I had a free ticket on AirTran and was going to use it to attend three spring training baseball games in Ft Lauderdale where my favorite team, the Baltimore Orioles, play. But right after making all the arrangements, I received an invitation to go to Portugal to speak at their Green Party National Congress so my baseball plans were cut short.

I still went to Florida, where I saw one baseball game on March 11, and then spoke at an event sponsored by Pax Christi in Ft Lauderdale at a local Catholic church. While there, I stayed at the home of Linda Raymer who was one of our most loyal participants years ago when I frequently organized peace walks up and down the state of Florida while working at the Florida Coalition for Peace & Justice. Linda's son Gareth picked me up when I arrived at the airport. Years ago a shy, skinny Gareth regularly attended the Youth Peace Camps that I would organize each summer for young people from throughout the state. Jeffrey Keating filmed my talk at the church that night and intends to send it to Free Speech TV for airing.

On March 12, I boarded a plane in the early evening for the overnight flight to Lisbon, Portugal. I arrived in Portugal on a sunny and cool spring morning about 8:00 am. After standing in line a long time to get through passport control, I took a cab to the hotel where folks attending the Green Party Congress were staying. I was invited because two leaders of the group, Manuela Cunha and Victor Cavaco, had heard me speak at the Global Greens conference last year in Brazil. I later learned that when they returned to Portugal they began making plans to invite me to speak. They wanted me to make the connections between climate change and global militarism and to offer some thoughts on what the world could expect to see from the newly elected Obama administration.

After trying to catch up on my sleep, I arrived at the Green Congress on March 13 soon after that day's session began. The hall that the event was held in is owned by a community of artists who also provide on-site housing for low-income retired artists. The logo for the conference, a sunflower with the green Earth in the middle of the flower, was displayed on a huge banner on the stage. The hall was filled with several hundred people and I was immediately impressed with the cooperative and patient spirit of everyone involved in the event.

The Greens in Portugal have two members of Parliament (MP's) as they share a coalition with the Communist Party in their country. They also have many local elected officials across their small nation.

As I sat listening to speakers at the Congress, Victor Cavaco translated the key points of the speeches that were underway. Delegates to the Congress were speaking against nuclear power, against privatization of hospitals, water, education, and the railroads. The current Socialist government in Portugal is cutting social services and government jobs. (Just the day before I learned that the public sector unions had organized a protest of over 200,000 people in response to the cuts.) The Socialists promised that, if elected, they would allow a referendum on the European Union (EU) constitution but broke their promise.

I was told by Francisco Madeira Lopes (one of the MP's) that Portugal is the least energy efficient country in Europe but the government continues with corporate dominated energy policies. (Like in the US the car culture is strong in Portugal.) The energy industries are now making big profits on what were once public sector entities before privatization. Victor told me that "The public is losing faith in politicians - they say one thing and do another."

While at the Global Greens conference in Brazil last year, I witnessed that not all Greens in Europe were the same. Some that get into power begin to shave the edges on issues in order to stay in power. It was very clear to me that the Portuguese Greens do not suffer from that malady - they are the real deal. In a country of 10 million people the Greens in Portugal are fighting alongside the people on issues that matter to them in their daily lives.

Victor, who is a paid staff person for the party, arranged a four-day program to have me visit four cities north and south of Lisbon while I was there. On March 15 I took a train north three hours to Porto where I was met by Maria Joao and her husband Pedro. They showed me some of the sights in the beautifully lit city as we headed down to the river. There one finds many of the port wine companies that the city is famous for and we crossed the river on a bridge built by the famous Gustave Eiffel, who also built the Eiffel Tower in Paris. The bridge was constructed using much of the same technology so the similarities were obvious. We had dinner at a beautiful restaurant along the river and had a wonderful political discussion. Maria was very interested in the recent AIG bailout controversy. Maria's conclusion was, "The public is frustrated. We must change the system. Just bailing out the rich greedy bankers and leaving them in place would not make much difference," she concluded.

On March 16, I was picked up by Celso Ferreira who drove me from Porto to Braga which is about two hours further north. There I did two newspaper interviews and was given a tour of the ancient city which is an archaeological treasure. Churches, Roman ruins, narrow ancient cobblestone streets with famous Portuguese tiles on walls telling stories about the history of the city, were abundant. Two of Celso's friends, one of them a Green city councilman, took me around after we all had shared a wonderful lunch at a favorite restaurant.

On March 17, I took the train again south to the city of Santarem where Manuela Cunha and a friend picked me up at the station. Both women serve on their local city council as Green Party officials. The city was described in tourist literature this way: "The foundation of Santarem takes you back to Greek-Roman and Christian mythology, recognizing the mythic origins of the names Habis and Irene. The first documented signs of human occupation date back to the 8th century B.C. The population of the village had collaborated with Roman colonizers when they arrived in 138 B.C." Needless to say it was an impressive tour they gave me of this ancient place. Manuela made arrangements for me to do a TV interview with a regional station and then treated me to one of Portugal's most famous meals, stone soup, which I loved. Every meal begins with olives, bread and wine and ends with espresso coffee - Italian style. I skipped the coffee but loved the wine. Victor later told me the former fascist dictator had a saying that drinking wine was a patriotic duty as it "employed a million people" across the country. So I did my bit to help create jobs.

Portugal had a military coup in 1926 which installed a dictatorship that remained until another coup in 1974. The military gave way to democracy and granted independence to all of Portugal's African colonies in 1975. During the years of the military dictatorship many Portuguese democracy fighters were forced to leave the county. Victor's family moved to France (where he was born) and Manuela's family escaped to France as well. They had to go to France because nearby Spain was also living under Franco fascist rule. They didn't return from France until after the 1974 revolution.

Before leaving that night, on the train to head back to Lisbon, Manuela told me that "It's not the politicians who change things, it's the pressure from the people on the powerful who makes the change.....it's the same with all the governments." I was very impressed with Manuela. As we toured the city it seemed like she knew everyone we ran into on the streets. You could tell she was a respected political leader.

My last day in Portugal was March 18 and Victor picked me up in Lisbon at the hotel and we walked to the local subway line. From there we crossed the city to the port area and walked about a half-mile to the ferry that would take us across the river. Then we took a tram and a train to Setubal (40 km south of Lisbon). We were met by another Green Party worker who took us in his car to the natural park of Arrabida. After another fabulous meal with olives and wine, of course, we went for a ride in the hills overlooking the ocean and for a walk on the beach.

Related Topic(s): Conference; Congress; Democracy; Energy; Florida; Green Party; Iraq; Military; Peace; Portugal; (more...) Privatization; Revolution; Tripartite Empire; Tripartite Partners In FortressAmerica, Add Tags  (less...)
Add to My Group(s)
Go To Commenting
The views expressed herein are the sole responsibility of the author and do not necessarily reflect those of this website or its editors.