"The US government is on a “burning platform” of unsustainable policies and practices with fiscal deficits, chronic healthcare underfunding, immigration and overseas military commitments threatening a crisis if action is not taken soon."

David Walker served as Comptroller General of the United States from 1998 through 2008. He is now the CEO of the Peter G. Peterson Foundation and leader of the Fiscal Wake Up Tour. He has been a lone voice in the wilderness for the last decade regarding our looming fiscal disaster. As head of the General Accounting Office he would go before Congress and explain that the country need to change course before we flounder in a Perfect Storm of debt. They listened to him respectfully and proceeded to add $5 trillion to the National Debt in the next eight years. The borrowing binge is now entering a hyper-speed phase. President Obama has been only concerned with speed rather than long term corrective actions.

I don't believe it's too late to change course, but it will be if we don't take dramatic action as soon as possible. If nothing is done, this recession could linger for years. That is why we need to act boldly and act now to reverse these cycles.

I prefer the wisdom of Thomas Jefferson and Abraham Lincoln .

“Delay is preferable to error.” – Jefferson “Give me six hours to chop down a tree and I will spend the first four sharpening the axe.” – Lincoln

The $787 billion 1,074 page stimulus bill has been passed. President Obama has signed it. The market immediately dropped 500 points. It will have no impact on the economy in 2009. The bill will stimulate nothing but the National Debt. Within months, plans for another stimulus plan will be demanded by the Democratic led Congress because speed and the appearance of action are how politicians get reelected. When I see Senator Charles Schumer of New York make a speech on the floor of the Senate saying, "And let me say this to all of the chattering class that so much focuses on those little, tiny, yes, porky amendments, the American people really don't care", I want to throttle him. Only a U.S. Senator would consider $100 billion a little tiny pork. His words prove that our leaders are so corrupted and disconnected from real Americans that they are running this country for their own self interest and the interests of their corporate money backers. Abraham Lincoln, an honest and wise man by most accounts, knew that calling pork spending stimulus doesn’t make it stimulus.

When I see annual deficits of $2 trillion to $3 trillion that Congress has committed the country to in the coming years, I can’t help but associate our country’s situation with the last voyage of the Andrea Gail. Anyone who has seen the movie A Perfect Storm or read the book knows the story of the sword-fishing crew that got caught in the Halloween Nor’easter of 1991, known as the perfect storm. The story is a precise analogy to what will happen if our country doesn’t change course now.

The Andrea Gail (United States) is captained by Billy Tyne (Barack Obama) with his young first mate Bobby Shatford (Timothy Geithner). Their fishing boat was fighting the rough waves of the North Atlantic (Financial Crisis) as they sought their prize of swordfish (Economic Recovery). While they were concentrating on the task at hand, the remnants of Hurricane Grace (Unfunded Liabilities of $53 trillion) was moving up the Atlantic coast. A low pressure system ($787 billion stimulus bill) moved off the East Coast and a strong disturbance (Bank Bailout) along a cold front coming from Canada combined to create a strong Nor’easter. The intensifying storm was already dangerous (Causing Unemployment and Bankruptcies), but when the subtropical power of Hurricane Grace was sucked into the maelstrom, it became a Perfect Storm (Financial Crisis of Epic Proportions). With 75 mph winds (Deficits) and 60 foot waves (Unsustainable Spending on Social Programs & Military Spending), the storm had become enormously treacherous. 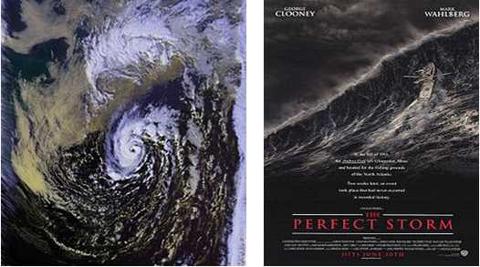 James Quinn is a senior director of strategic planning for a major university. James has held financial positions with a retailer, homebuilder and university in his 22-year career. Those positions included treasurer, controller, and head of (more...)
Related Topic(s): Banks; Children; Congress; Crisis; Education; Energy; Future; Government; Healthcare; Immigration; (more...) Military; Money; People; Taxes; Value, Add Tags  (less...)
Add to My Group(s)
Go To Commenting
The views expressed herein are the sole responsibility of the author and do not necessarily reflect those of this website or its editors.