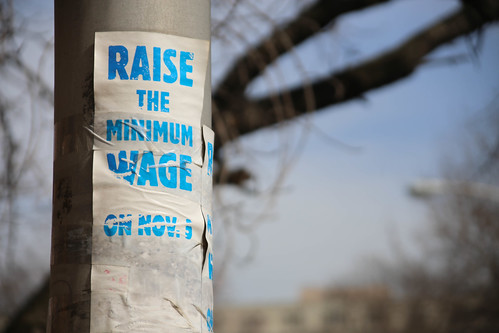 What will the Kingdom of Heaven be like for minimum wage workers? Ask the poor people Jesus speaks to in today's gospel. There the Great Teacher tells them a story about a character every employee -- all of us, I'm sure -- encounters at some point in her or his life. He's the skinflint boss who imagines himself a great humanitarian, despises his workers as lazy, and treats them with complete arbitrariness. He takes great delight in disappointing them -- simply because he can.

The familiarity of this comic book character must have set Jesus' audience laughing. And it probably started a long animated conversation about bosses, wages and employment.

Anyway, the story goes like this . . . It's late in the harvest season and this big fat landowner goes to the town square to hire fruit pickers who are shaping up there. (You can imagine him coming by in his pick-up truck, smoking his cigar, pointing at the strongest workers, and shouting, "Hey, you guys, get off your lazy duffs and jump in the back. I haven't got all day. There's work to be done!")

In the story, you can tell the owner's a cheapskate because he's careful to hire just the minimum number of workers he thinks can get the job done -- if he pushes them really hard.

But he miscalculates. So he has to return at noon for more pickers. But instead of blaming his own stupidity, he blames the workers. He calls them "lazy" for "standing around idle." He shouts at them, "Get in the truck, you lazy no-goods! You should be working!" (What does he expect? They're waiting for someone to hire them, for God's sake! But then coupon-clippers, like the boss in the story, always despise calloused hands.)

Now it's almost quitting time. With only an hour's daylight left, and with his fruit ready to rot in the fields, the skinflint owner finds himself back in the square hiring more workers. Again, he blames them for being lazy. But off they go to finish the day's work.

Then the punch line comes. The completely capricious landowner suddenly decides to play the generous humanitarian. So with great flair he gives a full day's wage to those last hired -- my guess is: just a few workers.

Naturally, the other pickers rub their hands together, drooling with expectation that they'll be paid more generously too. But of course old Scrooge disappoints them. (These kinds of bosses always do! They love it.) He decides instead to turn legalistic and teach these lazy good-for-nothings a lesson -- about power.

"What do you mean: 'MORE?'" he shouts like the beadle in Oliver Twist. "Have you forgotten our contract? And besides, I'm the boss. I can do what I want, and you can't do a thing about it!"

By this time, Jesus' audience surely had stopped laughing. They were probably grumbling and rehearsing their own similar experiences with cheap legalistic bosses who love to play the generous philanthropist.

But then Jesus gets everyone smiling again by adding with a wink: "And so it will be when the revolution comes (or as he put it -- "in the Kingdom of God") where "the first will be last and the last will be first -- you know what I mean?" He winks again.

It takes a while for the message to sink in. Not everyone "gets it." The audience scratches its collective head. Finally the penny drops.

"Oh, I see what you're saying, Jesus," someone says. She looks around at the others. "Don't you get it?" she asks. "All of the workers in the story are 'the last;' it's the boss who's 'first'." In the final judgment, Uncle Scrooge will be last and all of us will be first!"

The audience starts to cop on.

Related Topic(s): God; Jesus; Minimum Wage; Minimum Wage Living Wage; Sunday, Add Tags
Add to My Group(s)
Go To Commenting
The views expressed herein are the sole responsibility of the author and do not necessarily reflect those of this website or its editors.