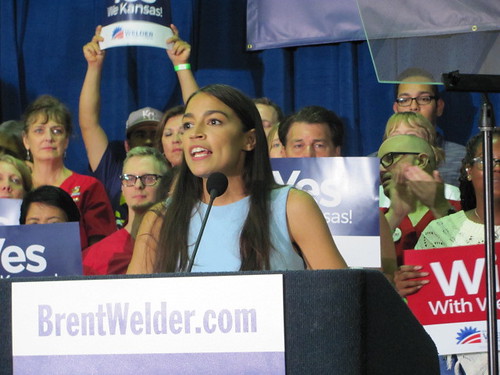 Listening to President Trump, you'd think the socialist barbarians were at the gates of America preparing to overrun the US with a Soviet-style state-run economy where every car would be the same make and color, everyone would be wearing Mao suits and freedom and social mobility, those great mythical assets that we supposedly have in unique abundance here in the land of the free and home of the brave, would vanish.

"Socialists" like Bernie Sanders and Alexandria Ocasio-Cortez want the US to be like Venezuela, Trump warns in his whiney little voice. Speaking to an audience of wealthy Venezuelan self-exiles in Florida, he said, "The socialists have done in Venezuela all of the same things that socialists, communists, totalitarians have done everywhere that they have had a chance to rule"This will never happen to us."

In most parts of the world, Trump's over-the-top and wildly ignorant denunciation of socialism would be greeted with uproarious laughter, as would his cartoonish characterization of Venezuela's current crisis (which is really the result mainly of the collapse in oil prices and economic sanctions by the US). But there's little amusement here in America, where socialism is, for many, still a dirty word, akin to Stalinism.

That's because almost uniquely in the world, Americans have been insulated and cut off from information about how in many very democratic nations, especially in Europe, socialist-influenced policies and programs, like free college education, generous unemployment benefits, highly progressive tax rates, retirement schemes that actually allow people to retire without falling into poverty, state-funded health systems that guarantee quality care to everyone, labor laws that guarantee generous vacations to all workers, and publicly funded, modern mass transit systems that make it so families don't need to pay for and drive two cars can exist and thrive in societies that are often freer and that boast more social mobility than the US.

That's why we can have people like Marc A. Thiessen, a right-wing columnist at the Washington Post, get away with publishing an inanity like the syndicated column he wrote last week headlined, "Why economic illiteracy is dangerous." In it, he condemns AOC for her "dangerous economic illiteracy" in "celebrating the tanking of a deal negotiated by her fellow Democrats" that would have brought HQ2, a second headquarters for giant e-retailer Amazon to New York City, allegedly producing "25,000-40,000 new jobs." In so doing, he displayed both his own ignorance of economics and taxes, and also a sterling example of the kind of pro-capitalist propaganda that passes for intelligent journalism in the US.

Thiessen, in condemning AOC's success in helping to kill that humongous tax give-away deal by New York City to a mega-company that last year and in 2017 paid no corporate profit taxes to the IRS on total net earnings over those two years of $13 billion, and in calling the feisty new young Congresswoman "economically illiterate," really is a suck-up offering a wet kiss to his boss, Jeff Bezos, not giving readers a reasoned lesson in economics. After all, while the brief bio at the end of his column doesn't mention it, the newspaper he writes for is owned by Bezos, Amazon's founder, CEO and at least subject to whatever divorce settlement he manages to reach (with no pre-nup agreement) from the wife he recently got caught cheating on and to the fluctuating value of his company's stock the world's richest man.

Thiessen's reasoning: In attacking the Amazon deal, AOC was claiming that the $3 billion tax holiday offered as a lure by New York's politicians in return for Amazon building a second headquarters in the city, is money that could instead go towards the city's hiring more teachers, fixing the crumbling subway, and putting people to work in other jobs at companies that pay their taxes.

"No, you can't," writes Thiessen. "Ocasio-Cortez does not seem to realize that New York does not have $3 billion in cash sitting around waiting to be spent on her socialist dreams. The subsidies to Amazon were tax incentives, not cash payouts."

Except that is true economic ignorance on Thiessen's part.

Ocasio-Cortez's objection to the tax giveaway to America's largest company is partly that it is just the latest in a decades-long extortion campaign by corporate America (and foreign firms too) to force local and state jurisdictions in the country to compete with each other in cutting the taxes on companies to try to keep them in or lure them to their jurisdictions. It's a classic race to the bottom, and she didn't want New York playing that game any more. It is also real money because if Amazon wouldn't pay $3 billion in property taxes or sales taxes or whatever on its facility and operations for some period of years under the deal, other companies currently struggling to survive in the city will have to pay those taxes for it. Because after all, the city has bills to pay, including for services required by what would have been Amazon's huge new headquarters things like increased demand on subways, increased wear and tear on local streets, increased police protection, increased numbers of students in local schools, etc.

If Amazon gets to skip out on paying for those services it will need, someone else will, and they'll respond by putting downward pressure on the pay of their own workers, by cutting back on their own investment and expansion plans, and perhaps by moving out of the city and taking their jobs with them.

Thiessen's economic ignorance is simply appalling. What do they do over there at the corporate-funded American Enterprise Institute anyway? It sure isn't studying economics. AIE, according to SourceWatch, is heavily supported by donations from the Koch brothers, with brother David sitting on its National Council. Other major right-wing funders include the DeVos Foundation, the Searle Freedom Trust and the John M. Olin Foundation.

Thiessen quotes Mayor Bill de Blasio as saying that had Amazon located its HQ2 in New York, the operation would have over the years contributed "$27 billion" in new tax revenue to the city. But that's an absurdly high and meaningless projection. For one thing, it doesn't state a time frame, nor does it explain what those taxes would be on or how they'd be calculated. Companies like Amazon, Apple and Google are geniuses at dodging taxes. They do this by internal pricing schemes that shift how and where their income and expenses get booked in order to end up reporting expenses in the highest tax locations in which they operate, and profits in the lowest taxing jurisdictions.

As Forbes magazine reporter Stephanie Denning wrote in that magazine in an article titled "Why Amazon pays no corporate taxes," in 2017 and 2018, years that Amazon paid no federal taxes on its massive net profits of $3 billion and $10 billion, it did pay $1 billion and then $1.18 billion in combined state, local and international taxes. (Actually, right there we can see how it works. Note that the tax they paid in both years is virtually identical though in one year the net profit is ten times higher than in the prior year.)

Related Topic(s): Amazon; Aoc; Corporations; Economic Justice; Economic Terrorism; Economics; Extortion; Jeff Bezos; Socialism; Taxes, Add Tags
Add to My Group(s)
Go To Commenting
The views expressed herein are the sole responsibility of the author and do not necessarily reflect those of this website or its editors.