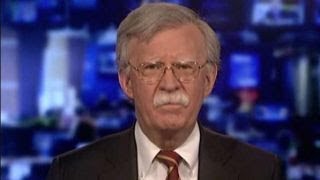 John Bolton's career of pushing for bombing countries like Iran and North Korea, and his having played an active role in the Bush/Cheney regime's criminal war of aggression that destroyed Iraq, makes him a clear and present danger to our country and world peace. He is about to become Donald Trump's personal national security adviser with a staff of 400 right next to the White House. He must be stopped!

For Bolton, the Constitution, federal law, the Geneva Conventions, and other international laws are pieces of paper to be thrown away with unctuous contempt. This outlaw -- the shame of Yale Law School -- should have been cast away as a pariah if not prosecuted and imprisoned. A bully to his subordinates in the government and known as "kiss-ass" to his superiors, Bolton is aggressive, relentless, and consistently wrong, when not prevaricatory.

Under Secretary of State Colin Powell, during the imperial Bush/Cheney presidency, Bolton told the media that Fidel Castro was developing chemical and biological weapons. False. Secretary Powell, who believes Bolton is impetuous and dangerous, overrode his in-house liar and corrected the record. While in Cuba with a group, I heard Fidel Castro say he feared Bolton's words were a precursor to a U.S. attack until Bolton's remarks were dismissed by his superiors.

There is a remarkable liberal/conservative dislike and fright about Bolton having Trump's ear daily. Especially since Trump is susceptible to adopting the positions of the last person who reaches him. The added danger is that Secretary of Defense Jim Mattis has privately told people that he, like many who have experienced Bolton in government, cannot work with him. So does that mean that Trump will have to choose between the restraining hand of General Mattis and the recklessness of the draft-avoiding torture advocate John Bolton?

Will Republicans, who refused to confirm Bolton as U.S. ambassador to the United Nations in 2005, assume some responsibility for opposing this sociopath? They could easily pass a joint resolution of Congress demanding withdrawal of the appointment by Trump.

There are many vigorous critics of Bolton's career and subsequent belligerent stances; Just last month Bolton wrote an op-ed in the Wall Street Journal demanding the bombing of North Korea. His juvenile, lethal positions avoid considering the consequences, responses, backlash and danger to our country's own safety. He likes to bet on the world -- a Dr. Strangelove on steroids.

A lengthy New York Times editorial (March 23, 2018) declares, "Yes, John Bolton Really is that Dangerous." It begins: "there are few people more likely than Mr. Bolton to lead the country into war." Especially since Trump -- mired in domestic scandals, investigations, and personal lawsuits -- may wish to wag the dog and start wider, distracting, armed hostilities abroad.

The American Conservative magazine is stirring that segment of the political spectrum with Gareth Porter's article, "The Untold Story of John Bolton's Campaign for War with Iran." Trump didn't like General McMaster's (Trump's outgoing National Security Adviser) counsel that the U.S. remain in the Iran nuclear accord and not isolate itself from other major country signatories who say Iran is complying with its terms.

How does such a deep hatred in the White House connect to Trump's repeated declaration that he allegedly seeks a peace agreement between the Israelis and Palestinians?

Republican constitutional law analyst, Bruce Fein, presents a strong case that the powerful position of national security adviser to the President must be confirmed by the Senate. In which case, Bolton would be gone.

"The Appointments Clause of the Constitution militates against the National Security Adviser aberration. It makes Senate confirmation of 'officers of the United States' the rule. But Congress may by statute create exceptions for 'inferior officers.' But it has not done so for the Adviser -- even assuming the office qualifies as 'inferior.'"

Related Topic(s): Bombing; Danger; Iran; Korea; National Security Adviser; People John Bolton; Trump Hypocrisy, Add Tags
Add to My Group(s)
Go To Commenting
The views expressed herein are the sole responsibility of the author and do not necessarily reflect those of this website or its editors.