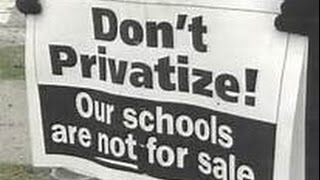 Republicans in Congress want to go even further, to privatize Medicare, the Postal Service, National Parks, air traffic control and other functions of our government. This is on top of previous privatizations of military contracts, and even the Senate cafeteria.

What exactly is privatization, and why is it such a priority for the Trump administration?

Back when our government was run by "We the People," the people would make a public investment and share gains from that investment. If we built a road or a bridge, we could all use it, and our economy as a whole would benefit from this increase in transportation capacity.

Over time, as a nation we built up a wealth of "public structures," both physical, such as roads, and institutional, such as courts and schools. These were the envy of the world. And We the People, theoretically, shared the benefits of this public wealth, and access to it.

Our public schools were open to all children. Our parks were enjoyed by millions. Everyone could drive on the highways and bridges. Public water systems brought good, safe drinking water to our homes. The list goes on.

Our businesses also benefited from these public structures. Our transportation infrastructure let companies move raw materials and goods. Our courts protected their interests. Our financial regulations protected their investment. Our public wealth was the fertile ground of American prosperity. You could say that prosperity was the fruit of democracy.

Privatization = Public Loss For All, Private Gain For A Few

In the 1970s, corporations and conservatives launched a campaign to grab public wealth for the already-wealthy few. Drawing on the works of ideologically-driven economists like Friedrich von Hayek and Milton Friedman, they began to propagandize about the evils of government, with slogans like "government is inefficient," "businesses do everything better than government," "taxes are theft" and "government spending is bad."

Of course, their real target was democracy, where We the People make decisions about how to use government. In a democracy, government spends money to try and make all of our lives better.

"Privatization" means taking public wealth and assets that benefit us all, and turning them over to the private sector, where only a few reap the reward. When you "privatize" a road or a bridge, people have to pay a toll to use it, so the new "owners" of the road can make a profit.

There is another problem with privatization. Democratic governments aim to serve as a model of what the public wants, so they try to provide jobs with good pay and benefits. When governments are talked into "saving money" by privatizing, what often happens is employees are laid off, then the private company hires new workers, or rehires the old ones, at lower wages with fewer benefits.

The result is that laid-off employees are impoverished, while new hires are also impoverished, because they are no longer paid a living wage. A local, state or national government might have "saved money" in the short term by lowering wages and externalizing costs, but the communities where these people live ultimately suffer the consequences.

Homes are foreclosed and neighborhoods lose value. Property and income taxes are reduced, there are fewer customers for local businesses, schools are stressed as children move into poverty, and the need for emergency government assistance like Food Stamps rises. So while privatization shifts benefits to a few, all taxpayers inevitably bear the costs.

Privatizers promote this kind of transfer of public wealth to private hands with claims it "saves money." But privatization impoverishes and harms communities, which costs taxpayers more than it saves. More importantly, it hurts people, which really ought to be our primary concern.

Related Topic(s): Infrastructure; Privatization; Schools; Trump Presidency; Veterans, Add Tags
Add to My Group(s)
Go To Commenting
The views expressed herein are the sole responsibility of the author and do not necessarily reflect those of this website or its editors.