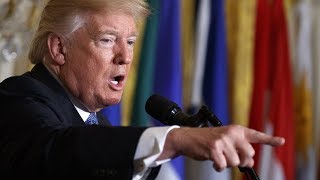 The United States of America is currently burdened with a president who suffers from a severe case of Narcissistic Personality Disorder. Donald Trump's psychological impairments are obvious to objective observers and represent a clear and present danger to the welfare of the nation -- and the world. He is utterly incapable of performing the duties of the presidency without placing his own interests before those of the people he is sworn to serve.

Trump's raging ego and self-exaltation has been demonstrated time and time again in the two and half turbulent years that he has occupied the White House. He cannot admit mistakes even when the evidence is unarguably documented. He incessantly brags on his own behalf for "accomplishments" that don't exist. Those include "resolutions" of problems that he created himself like a firefighter moonlighting as an arsonist. And he has repeatedly forced his subordinates to sit around a table and utter slobbering tributes to him in a perverse spectacle of supplication and sycophancy.

So it shouldn't surprise anyone that Trump continues to be plagued by one particularly humiliating failure. His historic loss of the popular vote to Hillary Clinton in the 2016 presidential election gnaws at him like a famished piranha. He can't stop thinking about it, or lying about it. And that fetish reared its ugly head again in an interview with Chuck Todd on Meet the Press Sunday morning. The discussion was pure Trumpian bombast and delusion...

Todd: You didn't like the fact that you lost the popular vote. That bothered you didn't it?

Trump: Well I think it was a -- well again, I'll say something that again is controversial. There were a lot of votes cast that I don't believe. I look at California...

Todd: A million votes of what? What are you talking about?

Trump: Judicial Watch made a settlement.

Trump is still insisting that millions of illegal votes were cast in California, despite having been thoroughly debunked without a shred of evidence. And his comment that there were "votes cast that I don't believe" is both deranged and frightening, given the approaching 2020 election.

But then Trump wades into lunatic territory with his demand to look at a settlement with the ultra-rightist Trump-fluffers at Judicial Watch. Trump claims that it reveals an admission by California authorities that "a million votes" were cast illegally. Trump couldn't explain what he was talking about, even after prodding by Todd. So he clumsily changed the subject.

The settlement that Trump was referring to was one wherein California agreed to remove a million and half votes "inactive" voters from the registration lists. These were names of people who had not voted in several elections and had either died or moved. There was not a single one that had cast any vote, much less an illegal one. As reported by the Associated Press:

Related Topic(s): Popular Vote; Trump Claims Innocence; Trump Idiot-in-chief; Trump Mental State; Vote Suppression, Add Tags
Add to My Group(s)
Go To Commenting
The views expressed herein are the sole responsibility of the author and do not necessarily reflect those of this website or its editors.