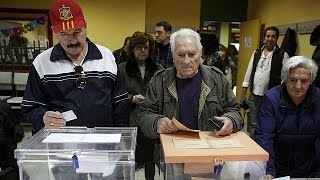 Only one thing certain in Spanish elections: the uncertainty of the outcome
(Image by YouTube, Channel: euronews (in English))   Details   DMCA

In what seems a replay of recent German and Italian elections, an openly authoritarian and racist party made major electoral gains in Spain's most populous province, Andalusia, helping to dethrone the Socialist Party that had dominated the southern region for 36 years. Vox (Voice) -- a party that stands for "Spain First," restrictions on women's rights, ending abortion, stopping immigration and dismantling the country's regional governments -- won almost 11 percent of the vote. The Party is in negotiations to be part of a ruling right-wing coalition, while left parties are calling for an "anti-fascist front," It's as if the old Spanish dictator Francisco Franco had arisen from his tomb in the "Valley of the Fallen" and was again marching on Madrid.

Actually, the results were not so much "stunning" -- the British Independent's headline on the election -- as a case of chickens coming home to roost, and a sobering lesson for center-left and left forces in Europe.

The Dec. 2 vote saw the center-left Spanish Socialist Workers Party (PSOE) lose 14 seats in the regional parliament and the leftist alliance, Adelante Andaluca, drop three. The conservative Popular Party (PP) also lost seven seats, but, allied with Vox and the rightwing Ciudadanos (Citizens) Party, the right now has enough seats to take power. It was the worst showing in PSOE's history, and, while it is still the largest party in Andaluca, it will have to go into opposition.

On one level the Andalucian elections do look like Germany, where the neo-fascist Alternative for Germany (AfG) took 94 seats in the Bundestag, and Italy, where the right-wing, xenophobic Northern League is sharing power with the center-right Five Star Movement.

There are certainly parallels to both countries, but there are also major differences that are uniquely Spanish.

What is similar is the anger at the conventional center-right and center-left parties that have enforced a decade of misery on their populations. Center-left parties like the Democratic Party in Italy and the Social Democratic Party in Germany bought into the failed strategy of neo-liberalism that called for austerity, regressive taxes, privatization of public resources and painful cutbacks in social services as a strategy for getting out of debt. Not only was it hard for most people to see a difference between the center-left and the center-right, many times the parties governed jointly, as they did in Germany. Andaluca's Socialists were in an alliance with Ciudadanos.

Conn M. Hallinan is a columnist for Foreign Policy In Focus, "A Think Tank Without Walls, and an independent journalist. He holds a PhD in Anthropology from the University of California, Berkeley. He oversaw the (more...)
Related Topic(s): Elections; Podemos; Spanish, Add Tags
Add to My Group(s)
Go To Commenting
The views expressed herein are the sole responsibility of the author and do not necessarily reflect those of this website or its editors.