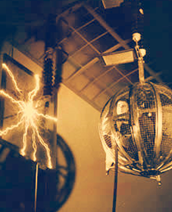 Sonnet: By Faraday's Light, We See What We See

Seeing some spark of speculative light's one thing,

but looking into the soul of God's another

often as it's fading at the horizon's edge,

just before some invisible vacuum takes it,

and the held after-image we need starts to fade.

But we have yet to hold the gaze of Big Bang bling;

it's almost there, in some paradigm or other,

an elegant willingness to creep long the edge;

but we lose our grip, abstruse expression makes it

in vain, impossible to sustain, and we jade.

Eliot wrote, we shall not cease from exploration,

but I must admit there's a growing temptation.

Related Topic(s): Conscious Feelings; Consciousness - Enlightenment; Counter-enlightenment; Left Behind; Light; Light Consciousness; Light To Light; Speed Of Light; The Daily Beast; The Man Who Knew Infinity; (more...) The Origin Of Flight; The_Age_of_Enlightenment; Twilight; White-flight, Add Tags  (less...)
Add to My Group(s)
Go To Commenting
The views expressed herein are the sole responsibility of the author and do not necessarily reflect those of this website or its editors.